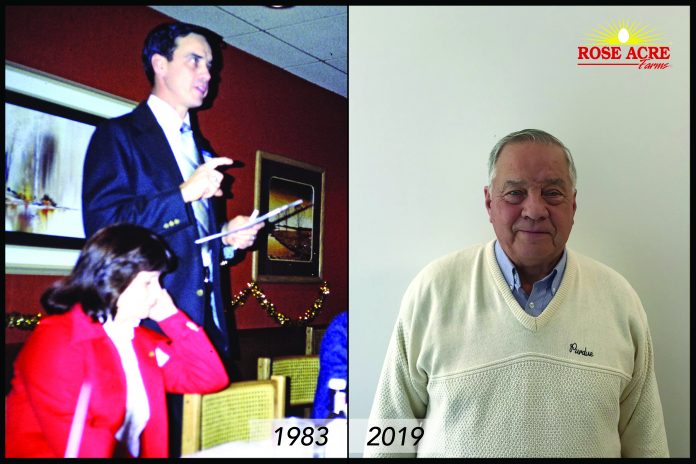 Growing up in rural Jackson County, Indiana, agriculture played a significant role in Larry Isaacs’ life and set the tone for his career choices as an adult. Isaacs grew up in the Honeytown area just north of Brownstown, Indiana, like most rural Indiana teens did at the time — helping out on the family farm and playing sports.

After graduating from Cortland High School in 1959, Isaacs attended Purdue University to study agriculture. During his freshman year, Isaacs tried out, and made, the freshman basketball team. At the time, freshman weren’t eligible to play in NCAA varsity sports, so freshman teams were assembled to scrimmage amongst themselves or against other organized teams on campus.

The following year, Isaacs was invited to come back and try out for Purdue’s varsity team. Isaacs made the team, coached by Ray Eddy, and played the remainder of his career with the Boilermakers. During his three-year career, Isaacs and the Boilermakers posted a combined 40-31 record and tied for second in the Big Ten Conference in the 1960-1961 season. Isaacs played amongst the likes of Purdue’s Terry Dischinger, Ohio State’s Jerry Lucas, Indiana’s Jimmy Rayl, and Ohio State’s Bobby Knight.

While studying at Purdue, Isaacs was also involved in the Army ROTC program for all four years. While in the program, Isaacs studied various transportation programs and methods used by the Army and upon graduation in 1963, Isaacs was commissioned 2nd Lieutenant and assigned to Fort Eustis in Newport News, Virgina. Fort Eustis is home to the Army’s transportation school, making this a logical destination for Isaacs to serve his two year service commitment.

Isaacs married Sue Curry in September 1963 and they reported for duty in November 1963. When Isaacs arrived, it didn’t take long for him to return to the basketball court. Fort Eustis, like many other military bases, had a basketball team and the coach of the team soon began recruiting Isaacs to play. Isaacs played for two years with the Fort Eustis Wheels post team and had the opportunity to travel around the East Coast to play nearby Army, Navy and Marine bases. The Wheels won a tournament hosted by the Army in Isaacs’ first year with the team.

Towards the end of his two-year commitment, Isaacs learned of a job opening as a Science and Agriculture teacher at Clearspring High School in his native Jackson County, Indiana. Isaacs saw this as a great opportunity for a first job not only because of his passion for agriculture, but also as an opportunity to return back to his hometown. In August of 1965, Isaacs was granted an early discharge from the Army, and began teaching at Clearspring High School in the fall.

After finishing working with the Curry family, he continued to farm on his own and worked odd jobs to make ends meet. Isaacs then worked for Schafstall Incorporated installing grain storage and drying units. However, after a number of years working for the company, Isaacs decided it was time to find a job that offered much more stability.

Isaacs found that stability in another agricultural company: Rose Acre Farms. In February of 1982, Isaacs started out as a trainee at the Rose Acre Hatchery. Then, with all of four weeks’ experience, the hatchery manager left his position and Larry Isaacs was named the new hatchery manager.

“I knew some about chickens from working with the Curry family, but I didn’t know anything about hatching,” said Isaacs. “I hadn’t worked in a hatchery in all of my life up to that point. But after four weeks, I was able to pick a few things up.”

Isaacs was the hatchery manager for over 11 years, and as the company began to grow, he also began to oversee pullet and breeder operations in the Southern Indiana region.

In 1993, Isaacs was relocated to the Rose Acre office to assist in the planning of hatching new chicks and placing pullets at various farms. Isaacs still, in large part, does most of the same work today, however, more staffing has been added to assist as Rose Acre Farms has continuously grown and improved.

One of the improvements of Rose Acre Farms during Isaacs’ tenure that he notes is the changes in facilities and equipment from when he started in 1982. He also notes the implementation of more training and sufficient staffing as Rose Acres continues to expand.

Isaacs’ favorite thing about working for Rose Acre Farms is being able to continue doing what he grew up doing — working in agriculture.

“I just enjoy working in agriculture,” said Isaacs. “Even though it is at a large scale, egg production is still agriculture.

Isaacs also enjoyed his opportunities to travel for work. He’s been to a number of different countries such as Italy, Spain and England for seminars and other opportunities to learn about the industry.

One thing that Isaacs wishes that the public could know about Rose Acre Farms, is that even though it may be one of the country’s largest egg producers, it is a private, family-owned company.

“The number one thing about Rose Acre is that it is a family owned business,” said Isaacs. “It has become more like a family and a bigger part of the community in my 37 years here.”

Larry and Sue Isaacs still live in Jackson County where they have raised five sons. 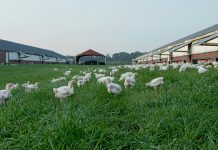