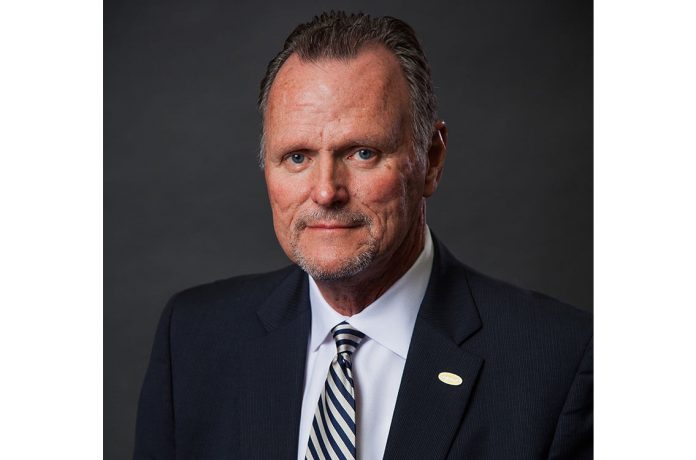 He was the oldest of six children born to Richard and Jeri Doughty on June 28, 1953, in Indianapolis, Indiana. Mr. Doughty was intelligent, kind and compassionate to others. He was an avid reader and willing to listen to different points of view and concerns when often others would not. He was hard working and held jobs at an early age, ranging from paper routes to dishwasher at a donut shop.

Upon graduating from Thomas Howe High School in Indianapolis, Mr. Doughty attended classes at Indiana University-Perdue University Indianapolis, but soon joined Dura Containers where he found his calling in sales.

Shortly after, he followed his father into the food industry, eventually becoming a salesman for Midwest distribution. He met his wife, Jan, during a blizzard in 1977 and in 1978, they eloped.

In 1982, a call from Wilson Foods and subsequent employment began a series of increasingly responsible sales and marketing positions. In 1985, at the age of 32, Mr. Doughty won a prestigious Ring Club award from Wilson Foods. In 1986, he started as VP of sales for Kretschmar Brands in St. Louis and in 1988, he became VP of sales at Loveland Foods, in Loveland, Colorado, where he sold Old Timer Bacon and Ham.

In 1990, a call from a former mentor at Wilson Foods necessitated a move to Fast Food Merchandisers (FFM) (Hardee’s Food Systems) in Rocky Mount, North Carolina, where Mr. Doughty was VP of customer service, then VP of international sales and SVP of sales for GolPak, the manufacturing subsidiary of FFM, establishing its offices in Brentwood, Tennessee, in 1996. When Perdue Farms bought GolPak in 1998, Mr. Doughty stayed with them as director of food service sales. He was quickly promoted to VP of food service sales. He remained with Perdue Farms in Brentwood until he joined Butterball LLC as EVP of sales, marketing and research and development in 2007 and moved to the Raleigh, North Carolina, area.

Mr. Doughty was promoted to president and CEO of Butterball in 2014, where he remained until 2018 when he was diagnosed with cancer.

During his tenure, different employers recognized talent in Mr. Doughty that they wanted to cultivate. To that end, he attended executive development programs at Northwestern University, McGill University, University of North Carolina and University of Virginia. In addition, his responsibilities took him all over the world.

In 2018, he was the recipient of the Urner Barry Poultry Person of the Year award.

Mr. Doughty made close friends of business associates and acquaintances along the way with his penchant for hard work and thoughtful consideration of others. He served on board positions including the American Heart Association-Triangle Heart Walk, the North Carolina Chamber of Commerce, the North American Meat Institute, the U.S. Poultry and Egg Association and the National Turkey Federation.

Most recently, as 2019 chairman of the NTF, Mr. Doughty presented the National Thanksgiving Turkey to the President and First Lady during the pardoning ceremony in the Rose Garden at the White House. At the completion of his term, Doughty was awarded a Lifetime Achievement Award by the NTF at its convention in Nashville on Feb. 15, 2020.

Mr. Doughty was an athlete and lifelong sports enthusiast who enjoyed playing golf whenever he could. He was an inaugural season ticket holder for both the Nashville Predators hockey team and the Tennessee Titans football team. He was a Notre Dame Fighting Irish football fan and an Indy Car race fan who attended at least 45 races at the Indianapolis Motor Speedway over the years. When the 2014 opportunity came to have Butterball sponsor a car for one race with the Andretti Team for the Indianapolis 500, he recognized the marketing possibilities and chose Ryan Hunter-Reay as the driver he wanted Butterball to sponsor. Hunter-Reay won the race that year with the Butterball logo on his car and on his racing suit.

Through it all, he was an attentive, considerate person and a great father, husband, son, brother and friend.

He is survived by his loving wife of 41 years, Jan Doughty and three children, Brooke Huber (Daniel) of Zionsville, Indiana, Devin Doughty (Ashley) of Henderson, Nevada., and Reece Doughty (Stephanie) of Los Angeles and two grandsons, Noah and Owen Huber. Other survivors include three sisters and one brother: Sherry Beck (Kelly) of Indianapolis, Bill Doughty (Susan) of Coopersville, Michigan, Stacy Doughty-Hall of Nashville, Indiana and Kelly Sue Rapp (Brian) of Gainesville, Florida. He was predeceased by his father, Richard (2005), mother, Jeri (2019), and sister, Teresa Doughty (2016).

At Mr. Doughty’s request, a Celebration of Life will be held in Cary, North Carolina, and in Indianapolis; both at a later date in view of current events. In lieu of flowers, the family requests memorial contributions be made to: Racing for Cancer, 951 Queen Annes Road, Houston, TX 77024.