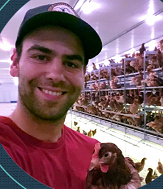 While working in Fort McMurray, Alberta, after high school, Jared de Dood invested in a 27-acre parcel of land adjacent to his family’s dairy farm in the Okanagan Valley in Grindrod, BC.

Just a few short years later in 2017, that investment in farmland grew into a new venture—egg production—thanks to the BC Egg New Producer Program.

Jared says he always knew he wanted to farm. “When I was in Alberta, I always wanted to get back to the farm,” he says. “Whenever I had time off, I was coming home to work on the farm, doing field work.” After four years in Alberta, he moved home to work on the family farm. Wanting to grow his own business in the agriculture industry, he saw an opportunity in egg farming. He created a business plan and applied to the BC Egg New Producer Program—and to his surprise, he won the luck of the draw—and immediately got to work to get his new venture up and running.

Being new to egg production, he says he relied on people in the industry to help him determine the best way to build his business. “The support was incredible,” he says, with egg producers from across the province willing to offer advice, tour him through their barns, and staff from BC Egg available to answer any question he had. “I ended up choosing three barns that I liked, and combined all the best features to make my perfect barn.”

Eight months later, he welcomed his first flock of 3,200 free range organic hens. He built his barn with room to grow—he currently has 4,500 hens, with capacity for up to 7,000. Seeing a long-term future in egg farming, he says he’s already thinking about where he might build a second barn on his property. “I’ve got enough ideas for the next 20 years,” he says.

A first generation egg producer, Jared is also a third generation dairy farmer on the farm his grandparents started in 1968, working in partnership with his parents, John and June, and his brother, Curtis. Together, they milk 110 cows and farm 275 acres of cropland. The family is in the early stages of a farm succession plan, but Jared notes that “we’re all on the same page, which is awesome.” While Jared and Curtis plan to take over the dairy farm as a joint venture, each brother will continue to operate their own enterprise—Jared growing his egg farm, his brother Curtis running a farm equipment dealership.

Jared is a passionate promoter of the egg industry, and has volunteered his time at events. He’s participated in the Pacific National Exhibition and the Chilliwack Fair, where BC Egg has a display of live hens, and as part of BC Egg’s sponsorship of Easter Seals Camps, where he’s helped serve breakfast to the kids and teach them about how eggs are produced. “I like answering all the questions, and it’s nice to get away from the farm sometimes,” he says.

Next up for Jared is to represent BC Egg in Egg Farmers of Canada’s national young farmer program in 2020. He heard about the program from past participants and says he wasn’t about to pass up the opportunity when he was invited to participate. The opportunity to meet with other young farmers and grow his contacts and relationships with producers with a varied background and knowledge of industry is what excites him about the program. “I’m curious about how everyone else farms across Canada,” he says.

Have you updated your biosecurity plan recently?