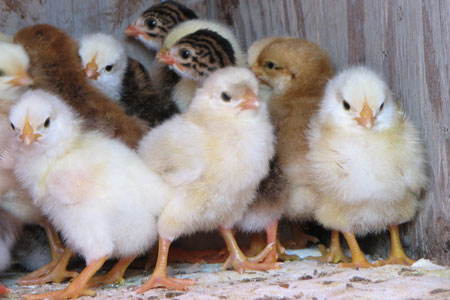 Coccidiosis is the most common disease of brooded poultry. It affects primarily chicks and poults (baby turkeys). But it may also (though rarely) affect keets (baby guinea fowl), ducklings, and goslings. It is the most common cause of death in young poultry.

Coccidiosis is an intestinal disease caused by protozoa. It most often appears in chicks three to six weeks of age. The worst cases occur at four to five weeks.

Chickens are susceptible to nine different species of coccidia. Each species invades a different part of the intestine. More than one species at a time may infect the same chick.

Many different animals are susceptible to coccidiosis. But the same species of protozoa that infect poultry do not affect other animals. The opposite is also true — poultry cannot get coccidiosis from other animals.

With one rather rare exception, different species of poultry cannot even get coccidiosis from each other. The exception is one type of coccidial protozoa that infects both guineas and turkeys.

Coccidia are tiny parasitic protozoa that naturally colonize the intestines of birds and other animals. Some of them are harmless. Others cause serious illness if they become too numerous. Coccidia may multiply too rapidly if birds pick up a lot of them by eating droppings in the feed, water, or litter.

Litter picking typically occurs when feed runs out or the brooder contains too many chicks. Crowding can result in each chick getting too little time at the feeder. They thus resort to picking litter. Crowding also offers chicks too little room to move around and explore the brooder. So they may pick at the litter out of boredom.

What Are Signs of Coccidiosis?

The main signs of coccidiosis are sitting hunched up and rumpled looking; slow growth; and loose, watery, or off-color droppings. If blood appears in the droppings, the illness is serious.

The disease may develop gradually. Or bloody diarrhea and death may come on fast.

Can Chickens Become Immune to Coccidiosis?

A bird that survives infection is immune to further infection from the species of coccidia that caused the infection. But a recovered bird is unlikely to thrive.

All ground-fed birds are exposed to coccidia throughout their lives. Gradual exposure allows them to develop immunity without becoming infected.

Birds brooded on clean loose litter are able to develop gradual immunity. Birds housed in a brooder with wooden slats or a hardware cloth floor, then later moved to housing with solid flooring, have little exposure. Since they have not developed immunity, they can become seriously infected.

Chickens become immune only to the species that occur in their environment. Healthy chickens brought together from different sources may not all be immune to the same species. They therefore may transmit disease to one another — with devastating consequences.

Can Coccidiosis Be Prevented?

The best way to prevent coccidiosis is to manage brooder and coop litter to avoid damp spots and caked droppings, Also keep feeders and drinkers free of droppings. Wash drinkers each time you refill them.

Another important preventive measure is to move your poultry out of the brooder and onto clean ground as soon as weather permits. A properly maintained outdoor flock is less likely to become infected than birds living in crowded conditions, brooded on damp litter, or allowed to drink water fouled with droppings.

When bringing new chickens into an existing flock, the best plan is to raise them from newly hatched chicks. If you must acquire grown chickens, quarantine them for four weeks before integrating them into the existing flock. To be reasonably certain the new birds are not carrying coccidia to which your existing birds are not immune, include one of your birds in the quarantine area. If it doesn’t come down with coccidiosis (or any other disease) by the end of the quarantine period, you should be good to go.

A vaccine is available that stimulates natural immunity to produce lifetime protection against coccidiosis. But to be effective, chicks must receive the vaccine by the time they are three days old.

For unvaccinated chicks, medicated starter ration will prevent a serious outbreak of coccidiosis. First-time poultry keepers would be wise to use a medicated starter, because it contains the coccidiostat amprolium. This medication also comes in a liquid form to add to drinking water. Vaccinated chicks, however, should never be given a coccidiostat, because it would neutralize the vaccine.

How Is Coccidiosis Treated?

Note that amprolium and other coccidiostats are strictly preventive measures. They won’t help birds already infected with coccidiosis. For a list of drugs used to prevent coccidiosis, and those used to treat coccidiosis, consult the Merck Veterinary Manual online.

Not all anticoccidial medications work against all species of coccidia. Using the wrong medication can do more harm than good.

If you suspect coccidiosis, isolate sick birds. Take a sample of fresh droppings to your veterinarian. Ask your vet to conduct a fecal test to identify the species of coccidia and to recommend the proper medication for treatment.

And that’s today’s news from the Cackle Coop.

Gail Damerow is author of The Chicken Health Handbook.