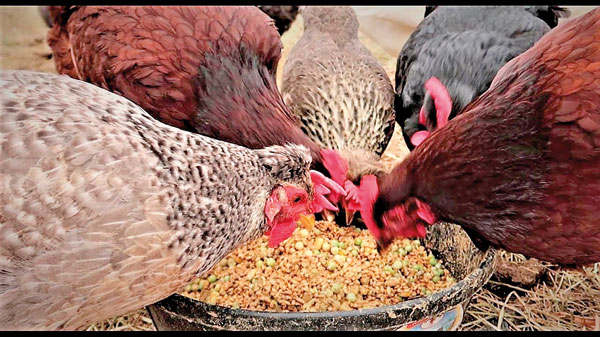 Poultry farmers are warning that rising feed prices, import restrictions and the forex crisis will lead to a production drop and further increases in chicken and egg prices ahead of the April national avurudu season.

“We expect chicken prices to continue rising due to feed and maize supplies drying up amid import controls,” Ajith Gunasekara, President of the All Island Poultry Association said.

“During the lockdown, we had been able to meet the market demand, but when the travel restrictions were lifted, the sudden surge in demand pushed the market prices of eggs,” he said.

Feed accounts for nearly two thirds of the poultry rearing cost and last year’s ban on corn imports had pushed the feed prices up.

“However we were able to keep chicken prices between Rs. 670 and 690 and the maximum retail price of an egg at Rs 25 during the December festive season,” Mr. Gunasekera said.

But prior to the festive season, egg prices averaged around Rs. 17, which was insufficient to cover the cost and as a result, many small-scale farmers left the industry. Price of eggs to rise further

With feed in short supply and prices high, poultry farmers were reluctant to buy chicks from hatcheries, Mr. Gunasekera said as they feared they would not be able to make a profit after six weeks of rearing.

Continued increases in imported raw material prices, the scarcity of local raw materials, the rupee’s depreciation against the dollar and the drop in supply would likely create a major shortage during the national new year season, the Poultry Association chief pointed out. He called on the government to take the measures needed to avert the crisis.

“Poultry feed is made from soya, maize, and sometimes wheat. There is a severe shortage of feed ingredients due to global and local market conditions, in addition to the forex crisis and supply chain issues,” Mr. Gunasekera said.

Lakshman Karunanayake, a small-scale poultry farmer, said an Avissawella trader from who he bought feed for his more than 3,000 layers had warned him of the looming crisis.

“So I fear what will happen next. Due to the feed shortage, I haven’t started breeding chicks. If the right growth is not achieved, it will be a big loss for me,” he said. He also said more people were eating chicken now due to the high prices of vegetables and as a result, the demand for chicken was growing.

“If we can’t find a solution to feed the animals, there will be a massive downfall in the production,” he warned.

Economist Badraja Mullegamgoda said import controls compounded with the forex crisis had a direct impact on the poultry industry and severely affected small-scale farmers and the urban people.

Feeding constitutes the fundamental and major management concern in poultry production and this includes concentrated feed made of rice, maize and supplements. Maize has been recognised as a major energy feed ingredient in the diet of poultry, he said.

The local corn production used in animal feed has seen a major drop due to fertiliser issues. Meanwhile, as a result of the dollar crisis, vaccines and medicines imports have also been curbed. Even the local producers need certain imported ingredients to make poultry feed, he said.

The shortage of chicken and eggs would also be major blow to the hotel and tourism industry, the economist pointed out.

The local maize production is insufficient to meet the 400,000 metric tonnes the industry requires a year, Mr. Mullegamgoda said.