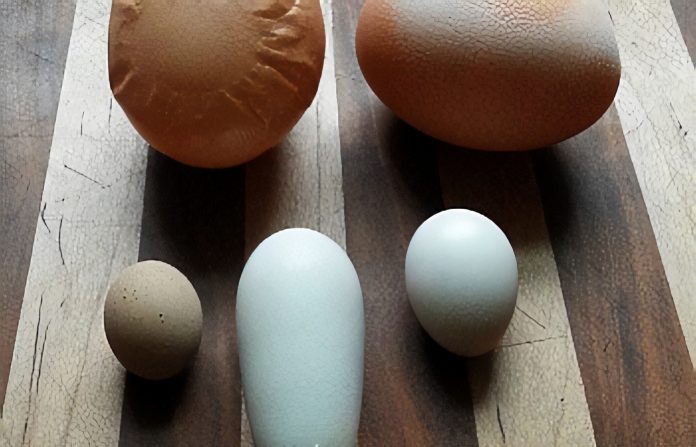 Approximately 2% of all chicken eggs has some defect, ranging from minor, barely noticeable faults to downright alarming deformities. So the chances are pretty good that most, if not all flock owners will at some stage find an irregular egg. This article is about the most common egg irregularities and problems and their causes. A few members have asked me if these odd eggs are safe to eat. That depends on the cause of the deformity/irregularity. Most of these eggs, though some may look rather unappetising, are perfectly safe for human consumption. If the cause of the deformity/irregularity is disease or treatment for disease/pest I would play it safe and discard the eggs rather as many drugs given to chickens leaves a residue in their eggs during the withdrawal period (usually 3 weeks).

To help us understand these problems and how they occur, let’s first look at how an egg is formed:

How an Egg is Formed

An egg is formed over a period of about 25 hours. The egg yolks are formed in the hen’s ovary. Hens, unlike most animals, have only one functional ovary, the left one. At the time of hatch each female chick will have up to 4 000 tiny ova, from some of which yolks may develop when the hen matures. At any given time, an active layer will have a number of yolks in her ovary, in different stages of development. (See pic in this thread for an example of what is in store in a productive hen’s tract at any given time: https://www.backyardchickens.com/threads/chicken-full-of-eggs.1242470/#post-19937313)

For a virtual tour of the reproductive tract, see here: https://vimeo.com/86122048?from=facebook 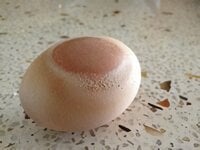 These eggs are the result of two eggs entering and making contact with each other in the shell gland pouch. When this happens, normal calcification (egg shell formation) is interrupted and the first egg that entered the pouch will get an extra layer of calcium, seen as the white band marking. Causes for this are:

– Stress in the flock;

– Changes in lighting, for example adding artificial light in the coop to encourage laying over winter;

– Diseases such as infectious bronchitis. 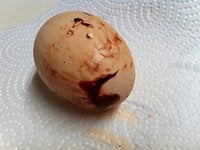 This can be anywhere from a few spots to a smear to an alarming amount of blood. Causes are:

– Small blood vessels ruptured in the hen’s vagina from excessive straining. This is more common in young pullets coming into lay and overweight hens;

– Sudden big increase in length of daylight (when supplementing light in winter months);

– A mite/lice infestation around the vent. 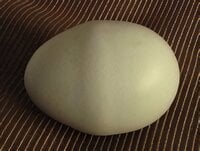 These eggs’ shells got cracked during the calcification process and had a layer of calcium deposited over the crack before the egg was laid. Some body checks are covered by a thick layer of calcium, forming an noticeable ridge or band around the egg. Body checks will increase if the hens are exited or gets startled late in the afternoon/early evening, when the egg shell formation process begins. Causes of body checks are:

– The hen’s age. There is a higher incidence in body checked eggs from older layers.

These are similar to body check eggs. The egg shell got cracked during the calcification process and mended just before being laid. Cause:

– Stress, frights or disturbance during the calcification process. 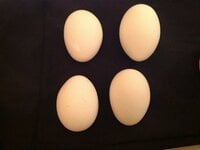 These eggs differ from the normal shape and/or size and can be either too large, too small, round instead of oval or has major changes in the shape. Shapes can range from minor, barely noticeable to grossly misshaped. Causes are:

– Overcrowding in coop and/or run. 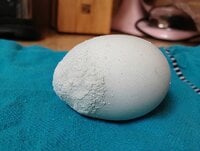 These egg shells have white coloured, irregularly shaped spots deposited onto the external surface of the shell. It can range from a few spots to a severe deposit, as shown in pic #6. Causes are:

– Disturbances and/or stress during the calcification process;

7. Lack of pigment or uneven pigmentation on egg shells 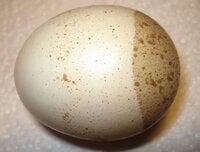 The causes for this can be:

– Poor nutrition. A deficiency in any of the main nutrients, protein, minerals etc in the hens’ diet can influence shell colour and formation. Zinc, copper and manganese are thought to be especially important in transporting pigment onto the shell. It has been suggested that a magnesium supplement can improve shell colour:

– Viral infections. Infectious bronchitis and it’s variants, Newcastle disease, egg drop syndrome and avian influenza can cause damage to the oviduct, resulting in loss of shell colour and other problems:

– Internal and external parasites. A heavy infestation of roundworms and or capillaria worms as well as red mites, when present as a heavy infestation, can have an adverse effect on egg quality and may cause pale shells;

– Drugs. The coccidiostat drug, Nicarbazin, if present in feed, can interfere with egg shell pigmentation;

– The hen’s age. And older layer will often produce eggs with paler shells, as well as a hen who had been laying intensively over a long period;

– Exposure to sunlight and high temperatures can produce a fading effect on the shell.

These eggs have an extra, powdery layer of calcium, covering either the entire egg, or just one end of the egg. Causes are:

– Disturbance or stress during calcification process; 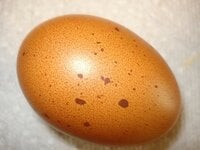 Spots or speckles can be either brown or white. They are similar to calcium deposits, except the speckles are smaller. Speckles may or may not be pigmented. Some of the causes are:

– Stress or disturbance during calcification process;

‘Speckled’ eggs can happen for several different reasons…very few, if any, of which are a ‘problem’.
Can be caused by:

– Excess or uneven pigment coating.
– Excess or uneven cuticle(bloom).
– Excess calcium deposits.
– Porous eggs can appear speckled.
– Some birds lay them consistently, some only once in awhile.
– The pigment or bloom can change appearance when wet, then change back when dry again.

As long as bird is getting a good diet and is healthy in every other way, it is no cause for concern. 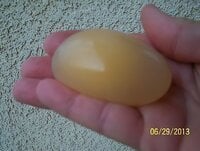 A shell less egg consists of a yolk, albumen and membrane, but has no shell at all. The egg contents are protected by the outer membrane only. These are often seen in pullets coming into lay. Causes are:

– Nutritional deficiency, usually lack of calcium and vitamins E, B12 and D as well as phosphorous and selenium;

– An infestation of internal or external parasites, such as worms, mites or lice;

– Stress prompting the hen to lay an egg prematurely, before the shell is formed;

– Exposure to toxins, such as mold, fungi, bacteria. 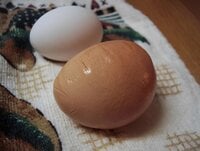 When two eggs enter the shell gland pouch shortly after another, normal calcification is interrupted. The second egg will not be as complete as the first and may be flattened at the side where the eggs made contact, resulting in a flat or slab side. Causes are:

– Disease, such as infectious bronchitis;

These eggs’ shells have thinly creased/wrinkled surfaces. The wrinkles can range in severity from a single small wrinkle to quite a few large wrinkles, as shown in the egg pictured. Causes are:

– Stress and disturbance during calcification process;

This happens when the egg membrane is thinner than it should be, often as a result of double ovulation (two yolks) and having to stretch thinner to cover the extra egg contents. This results in insufficient plumping of the egg, leaving a corrugated membrane onto which the shell gets deposited, so the shell takes on a corrugated appearance as well. Causes are:

– Excessive use of antibiotics;

– Copper deficiency in the hen’s diet;

– It is often seen with hens recovering from infectious bronchitis;

– It can be hereditary.

These tiny eggs may or may not have a yolk. Yolk-less fart eggs are often called rooster eggs. These little eggs are often much darker than normal, as they spend more time in the shell gland pouch and gets an extra layer or two of pigment. These yolk-less eggs sometimes form when:

– The hen’s oviduct releases a small piece of reproductive tissue or another small foreign mass enters the hen’s oviduct, triggering the regular formation of an egg. The foreign object will be treated like a normal yolk and enveloped in albumen, membranes and a shell;

– Occasionally a hen will also lay a fart egg when something disturbs her reproductive cycle;

– Young pullets may lay a fart egg or two when coming into lay and is still getting their reproductive systems in gear.

These eggs are laid with an incomplete shell, sometimes just a thin layer of calcium. Causes are similar to shell less eggs:

– Nutritional deficiencies, usually lack of calcium, vitamins E, B12 and D as well as phosphorous and selenium;

– Egg laid prematurely due to stress or a disturbance during the calcification process; 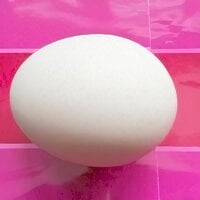 In mottled egg shells parts of the egg shell are translucent, taking on a mottled or glassy appearance.

These shells can also be thin and fragile. Causes are:

– High humidity in the coop (make sure the coop is well ventilated;

– Certain diseases, (such as infectious bursal disease) and mycotoxins;

– Manganese deficiency in the hen’s diet;

– Over-crowding in the coop. 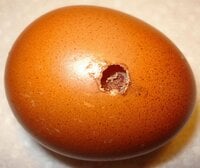 Pinholes, or small holes in the egg shell, may be the result of faulty laying down of the egg shell or from pimples being knocked off the shell. Possible causes are thought to be:

– Damage from toenails, or other sharp objects in the nest box, post laying. 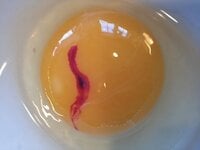 Can range in severity from a small spot of blood on the yolk to about a spoonful of blood mixed with the egg contents. Egg yolks form and mature in the hen’s ovary and sometimes when the mature yolk is released it may rupture a small blood vessel, the blood released will end up being encased in the shell, along with the rest of the egg contents. Causes of this can be:

– Incorrect levels of vitamins A and K in the hen’s diet;

– Administration of the drug sulphaquinoxaline;

– Large amounts of lucerne meal in the layers’ diet;

– Continuous lighting in the coop; 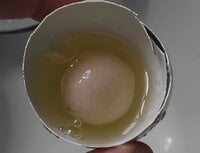 – Lack of yellow to red pigments in the hens’ diet. Hens who have access to the outdoors, green food such as lucerne and grass and hens who are fed maize will have deeper coloured yolks. Certain feeds contain additives, such as marigold extract to help deepen the yolk colour. 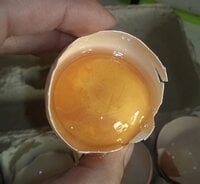 – Certain antioxidants such as gallic acid and tannic acid;

– Calcium deficiency in the hens’ diet; 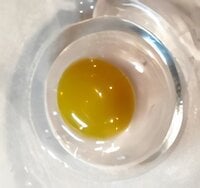 – Ingestion of the weed Shepard’s Purse. 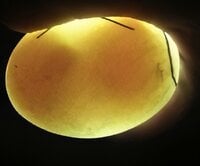 These are more common with your pullets just coming into lay. This happens when more than one yolk matures and gets released at the same time. As many as 9 yolks have been found in a single egg.

– Ingestion of velvet weed and other related species.

– An infestation of cappilaria worms and certain diseases. 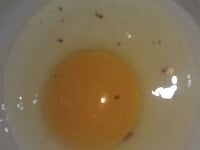 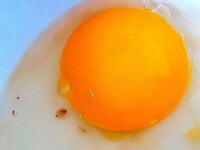 These are usually little bits of the lining of the oviduct which got shed during the egg formation process, but some may be partially broken down blood spots. They often take on the apearance of dirt or soil and vary in colour from pale yellow to dark brown or red, as shown in the images. Sizes vary from tiny specks to a few millimetres in diameter. There is a higher incidence of meat spots in eggs from older layers.

This can be caused by:

– Loss of CO2 from egg during storage;

– It can occasionally be a reaction to certain vaccinations.

– There is a higher incidence in eggs from older layers.

For example pink or green. Cause:

– Spoilage due to Pseudomonas bacteria produces a greenish, fluorescent, water soluble pigment in the albumen.

– A green tint to to albumen can also be caused by the presence of high levels of riboflavin (vit B2), which has a yellow green colour.

What Is a Dual Purpose Chicken?

From the Experts: Chick Tips for New Chicken Owners