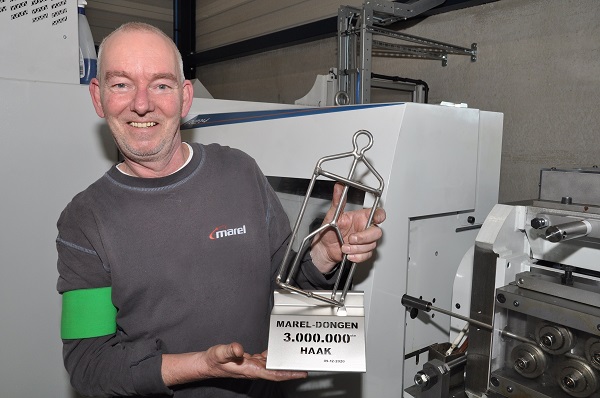 Marel’s manufacturing site in Dongen released its 3,000,000th poultry processing shackle since production began in 1987. A shackle may seem a simple metal hook, but in fact, it is a truly essential component in the poultry industry.

A shackle in an overhead conveyor is like a freight car on a railroad, responsible for the safe transportation of products from one point to another. It’s a cleverly designed construction, fit to hold the legs of all thinkable chicken species and sizes around the world.

For Marel – Stork at the time –, Hugo van den Elshout took up the job to construct the shackles in 1987. Back then, the production was mostly done manually on an anvil, like in a blacksmith shop. That process has evolved significantly in the last three decades. Today, advanced machinery, including a hydraulic press, a bending machine and a welding robot, is used to produce shackles.

Marel started the specialized production of shackles in Dongen back in 1987. The milestone of the first million pieces was reached in 1998. In 2011, the 2,000,000th shackle was produced. On average, about 90,000 pieces per year leave the factory, some 350 shackles on a daily basis. In top seasons, this number can increase up to 550 shackles a day. For the production of 3 million shackles, it took some 1,950,000 kilos of material; this is about the weight of 1,950 Suzuki Swift cars. When stretched out, all of the used material would extend from Dongen (the Netherlands) to Malaga (Spain), which is more than 3855 kilometers.

Today, with 33 years of experience, Hugo van den Elshout is still Marel’s own unwavering “Captain Hook”, making sure that every shackle leaving the factory is of highest quality and in pristine condition. In this respect, Hugo is the personification of Marel’s reliability and consistency.

Out with the Old. In with the new Flex-Flo XD ULTRA

Take Your Next Step with a True Aviary