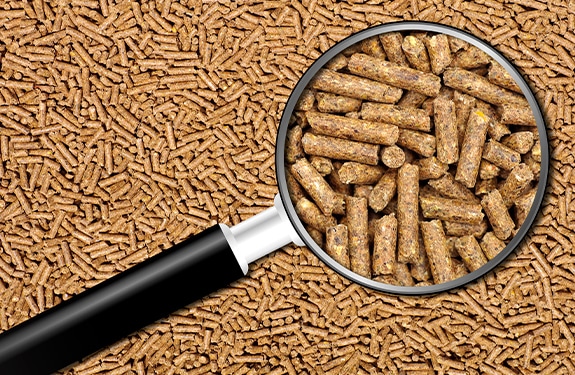 Feed manufacturing has made a lot of progress since the introduction of compound feeds. It is believed that compound feed was introduced by the British as horse feed during wars. These early compound feeds were baked biscuits consisting of a combination of oat, peas, rye, flax, wheat and maize (Coffey et al., 2016). During the 19th century, more and more emphasis was placed on the influence of nutrition on animal performance. The beginning of the 20th century marked a period of rapid technological innovation for feed production in Europe and the US. The most revolutionary innovation was the introduction of the pelleting process in the 1920’s-1930’s (Behnke, 1996; Castaldo, n.d.). Pelleting created opportunities to use materials that are unpalatable, difficult to handle and that vary in density to create uniform and easy to handle pellets (Coffey et al., 2016).

The first feed pelletizers were different compared to the ring die pelletizer, currently the most common type of pelletizer. These first pelletizers consisted of two counter-rotating dimpled rollers. The feed mash would enter the machine between the rollers and would be moulded into wafers by the dimples on both rollers (Castaldo, n.d.). These types of pelletizer had some major drawbacks compared to their modern counterparts. Firstly, due to the lack of feed mash conditioning, nutrient utilization was only slightly improved compared to previous forms of feed. Secondly, the roller assembly needed a precise setup to make sure the dimples of both rollers aligned perfectly; otherwise deformed pellets would be produced. Lastly, the produced wafers were of low density and thus did not provide major advantages in transportation compared to feed mash. The second type of pellet mill was a Schüler pellet press. This press was invented in the 1920s and used two interlocking gear like rollers to form feed into dense pellets, an improvement over the previous design, but the rollers were subjected to a significant amount of wear. the third type of pellet mill was introduced shortly after the Schüler pellet press, , the flat die pellet press, consisting of a stationary flat die on which two rollers are mounted, similar to the grinding stones on a wind or water mill. Rotation of the rollers forces the feed mash through the openings in the die, forming feed pellets. The flat die pellet press is still used today by some feed manufacturers. 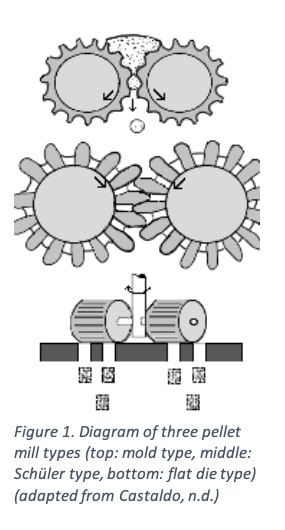 After the introduction of the pellet press, manufacturers shifted focus onto the conditioning of the feed mash with moisture and heat, and by the end of the 1930s the first conditioners were installed in feed mills (Castaldo, 2014). These conditioners, also known as ripeners, consisted of a barrel in which a shaft with paddles transported the feed mash while steam was added, similar to conditioners currently in use. Until the 1960s this conditioner design remained mainly unchanged, but now the conditioning temperature of feed mash is increasing from on average 65°C in 1970 to 77°C in 2000 (Castaldo, n.d.). Increasing the conditioning temperature results in stronger pellets with higher nutritional value and less harmful bacteria in the feed. Because steam is mainly used to increase the temperature of the feed mash, in the ’80s steam quality became an important factor. Lower quality (less energy-rich) steam means more steam is needed to reach desired temperatures and thus more water is added to the feed, which must be removed in later steps of the process. During the ’80s and ‘90s conditioning changed towards using high shear conditioners, such as expanders. (Behnke, 1996; Castaldo, 2014) or BOA compactors. The main reasons for the use of these high shear conditioners are the promise of better physical pellet quality, increased nutritional value, higher inclusion levels of liquids and an increase in production capacity.

Currently, there is a shift in the amount of feed produced by a feed mill. Due to technological advancements, the number of feed mills is declining while the amount of feed produced worldwide is increasing. One third of the world’s feed production is produced by feed mills located in Asia. Within Europe, the overall feed production is decreasing, and more focus is placed on food safety and traceability of feed within the food cycle. In the future, feed production will change to keep up with the global demands of animal products. It is expected that around the world more emphasis will be placed on food safety and the role of feed within the food chain. In Europe, this is already happening with restrictions on the usage of antibiotics and a change in public opinion on the usage of certain raw materials (Coffey et al., 2016). It is expected that feed manufacturing in the US and Canada will follow this trend.

Feed production in Europe is shifting from the production of large batches from a formulation for multiple farms into the production of smaller batches of tailormade feeds. These tailormade feeds are designed for specific groups of animals within a farm, as for instance chickens and pigs or, in case of ruminants, optimized to complement the roughages supplied on farm. To accompany this shift, feed mills need to change from lines specifically optimized to produce a small number of formulations at a high volume into lines that are highly flexible and can produce multiple different formulations in lower quantities. The increasing flexibility of feed mills is aided by advancements in computational power and mathematical modelling of the feed production process. In the future, feed mills will increasingly rely on computers and models to manage processing conditions, reducing the manual input required to operate a factory while improving the rate of production and consistency of the product. This will also allow feed mills to reduce their environmental impact (Coffey et al., 2016). The introduction of Near Infrared Spectroscopy (NIR) into feed mills will further optimize the quality and consistency of the finished feeds. NIR can perform real-time proximate analysis of materials with minimal sample preparation and without the usage of laboratory methods. Therefore, NIR can be incorporated in the feed production lines and used to constantly assess the quality of the raw materials and consequently adjusting processing parameters to adjust for raw material variation (Coffey et al., 2016; den Hartog & Sijtsma,2011).

The feed production process has evolved from mash feeding in the 18th century into the feeding of high-quality pelleted feeds. In the future, feed production will constantly be evolving and challenged to efficiently feed the growing livestock population and meet consumer demands. 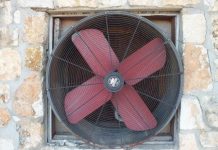 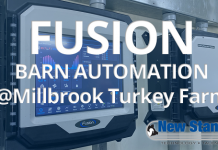