The infection, east of Prague, was the country’s second case of the H5N8 bird flu virus this year after a farm in the east of the central European country was affected in January.

“Testing proved this morning that it is the highly-pathogenic H5N8 bird flu version that is deadly for birds, however its transfer to humans has not been registered so far,” Toman said.

Bird flu cases have also appeared in other countries in the region since the start of the year.

Toman said another farm with 120,000 birds was in a 3-kilometre sanitary radius around the affected location, and authorities would decide on possible culling there in due course. 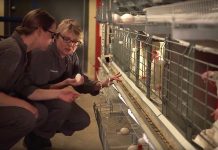