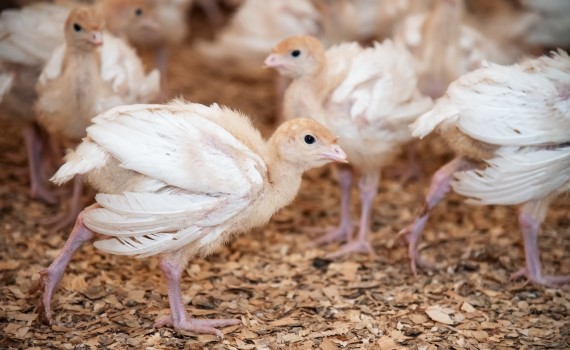 Minnesota farmers grow about 45 million turkeys a year on more than 500 farms according to the Minnesota Department of Agriculture. The price of those birds has steadily increased this year, as demand rose after being tamped down by the pandemic last year when fewer families gathered and restaurants were empty.

“USDA is actually predicting this year to be a record high price for turkeys,” said Tim Petry, a livestock marketing economist with the North Dakota State University Extension Service. “From a price standpoint, these are the best prices they’ve seen for a number of years. So you know, that’s good news for producers.”

While this year is better than last for turkey farmers, that good news on prices is tempered by rising costs to grow the birds.

“We grow mostly tom turkeys, which are the boys, and we process about 1.7 million birds a year,” said Jessica Westbrock, the president of the Minnesota Turkey Growers Association that helps run a large family operation in Stearns County, Minn.

High prices for corn and soybeans to feed the turkeys are carving a good sized slice off the farm profits, she added.

“Those are our two biggest ingredients and and those prices were substantially higher than last year or past years,” she said. “Consumers will see the increase, but the producer doesn’t necessarily get to take that home. We just have to pay more to grow the turkey.”

Nationwide, turkey production is down slightly this year. Even with higher demand, Petry expects there will be plenty of birds to buy. But consumers might see larger than normal turkeys in the freezer section.

Hens are typically sold as whole birds, said Petry, and the larger toms are typically used for turkey breasts or deli meat. But those production patterns have been shifting ahead of this year’s holiday.

“The industry knew that we’d be shorter on the whole birds this year. So they’ve funneled more toms into the whole bird market to help satisfy the Thanksgiving demand,” he said.

Westbrock said her farm has responded to that trend.

“We as tom growers have marketed more younger toms, we call them consumer toms to be put into a bag for whole bird [sales], than we ever have in any past years,” said Westbrock.

While turkey prices are up 17 cents a pound from last year, Petry said consumers are still likely to find bargains as many stores sell turkeys below cost, a practice known as a loss leader.

“A lot of times they do loss leader turkeys to lure customers in to buy the more expensive markup items that go along with the meal,” he said.

And Petry expects to see some stores offering deals on a turkey alternative.

“Ham prices are cheaper. That’s one of the few things at the wholesale level that are cheaper than last year,” said Petry. “And so we might see retail stores, putting kind of a big push on hams as well.”

The importance of proper turkey nutrition

Nutrient Requirements of Chickens and Turkeys

Coccidiosis — the Scourge of Chicks and Poults