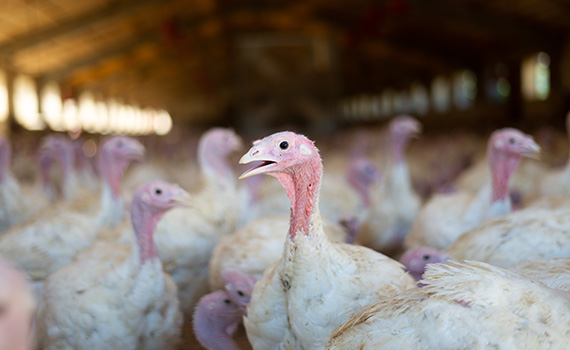 The widespread outbreak of highly pathogenic avian influenza (HPAI) across the US is expected to push the cost of turkeys to record highs this holiday season.

More than 7.5 million turkeys have been removed from production this year in a bid to mitigate the disease since it was first identified in birds in the spring.

The losses, combined with additional production challenges and a contraction of the industry in recent years, mean wholesale prices for frozen turkeys are almost a third higher than last year, according to a research brief from CoBank’s Knowledge Exchange.

And while there is no shortage of turkeys anticipated for Thanksgiving and Christmas, consumers can expect to see higher prices and smaller birds on supermarket shelves.

Brian Earnest, CoBank lead animal-protein economist, said that over the last decade the retail price for whole turkeys has hovered between 90 cents to $1 per pound ahead of Thanksgiving. But in its October 21 National Retail Report, the USDA put the price of frozen turkeys at $1.58 per pound.

Smaller turkeys are also a result of HPAI. Since the outbreaks began, average slaughter weights have dropped by about 1 pound.

HPAI has hit larger, heavier toms harder than hens, he added. Compared to the 3-year average, cumulative tom slaughter is down 9.8% in 2022, while hens are down only 2.3%.

In total, year-to-date turkey production in pounds is down 5% compared to last year, CoBank’s report said.

If this trend continues, 2022 US turkey production will drop 9.6% — the largest annual reduction since 2009.

But the effect on prices seems far more dramatic than the supply shrinkage. All turkey cuts have surged higher since spring, with fresh, boneless breast meat trading at $6.50 per pound — a 350% increase against fall 2021.

Earnest said the one wildcard for retail prices of whole turkeys this holiday season is grocer price promotions.

Historically, retailers have used frozen turkeys as a “loss leader” around the holidays, selling them at little or no profit to bring customers into stores.

However, grocers are facing their own inflationary pressures, and it remains to be seen how grocers will manage higher wholesale costs, he added