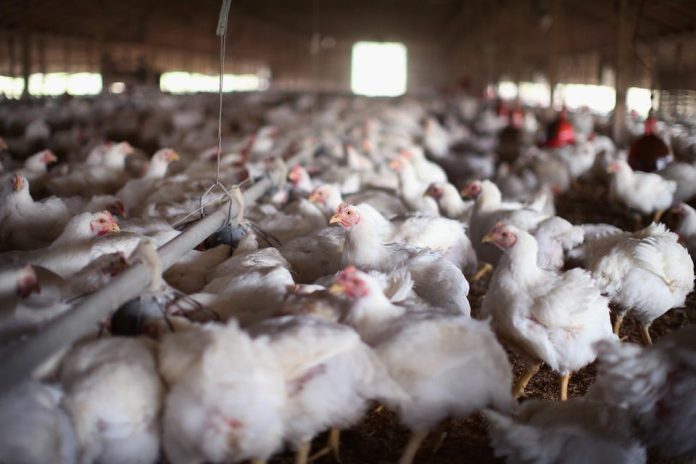 A criminal trial of former executives charged with fixing prices of poultry slaughtered and sold by America’s second-largest chicken processor kicks off today in Denver. It’s set to be a rare courtroom showdown that will put antitrust issues within the meat industry on full display.

Texts, phone records, emails and other snippets of conversations, which allegedly were in violation of the Sherman Act of 1890, between four former chicken industry executives, including the former CEO of Pilgrim’s Pride Jayson Penn, are expected to come out during the course of the felony trial.

The case is an offshoot from a sweeping Department of Justice probe into the meatpacking industry’s alleged antitrust violations that began in 2019. The former Pilgrim’s Pride CEO and other executives are the first to stand trial for criminal charges, which they have been fighting for two years.

Former executives at publicly traded companies more often accept plea bargains, if and when the government pursues an investigation in the first place. But the rarity of a felony trial with ten years of jail time on the line means that, if the jury reaches any guilty verdicts, the presiding judge will have a prime opportunity to use the sentence as a way of warning executives who might try similar behavior in the future.

It would also serve as a signal for the boards of directors and investors: High profits thanks to price-fixing schemes cannot keep manipulating industry standards and Wall Street expectations. At least $361 million worth of chicken sales were impacted by Pilgrim’s Pride’s price-fixing, according to the DOJ estimates.

“If they get three to four years prison time, this is not a place your average corporate executive wants to be,” says Peter C. Carstensen, a professor of law emeritus at University of Wisconsin-Madison who served as associate dean between 1993 and 2002. “We talk about criminal penalties as having a deterrent effect. This is the place where a significant criminal penalty might have a significant effect.”

The executives are charged with violations of the Sherman Act of 1890, America’s main antimonopoly law, which foresaw price-fixing in the meat industry and outlined severe criminal penalties to try to prevent it from happening. The law, amended and ratified in 1914, dictates a maximum sentence of ten years in prison and a fine of $1 million for individuals, or $100 million for corporations. Or whatever’s more: either twice the profits from the crime, or twice the victims’ loss.

Penn joined Pilgrim’s Pride in 2012 as executive vice president in Greeley, Colorado and became president and CEO in 2019.

Pilgrim’s Pride, founded in 1946 in Mt. Pleasant, Texas, went public in 1986. The world’s largest meatpacker, Brazil-based JBS acquired a majority stake in 2009 when the firm went into bankruptcy. JBS bought out the remaining shareholders of Pilgrim’s Pride and, this past August, announced that it was taking the chicken processor private. It is now part of the holding company’s existing JBS USA subsidiary.

JBS is majority controlled by its founding family, the Batistas, and particularly the brothers Joesley and Wesley, who became notorious for transforming JBS into a global meatpacker while partaking in a massive corruption scheme, which briefly sent them to Brazilian jail. They each have a fortune Forbes estimates at $3.9 billion. No members of the Batista family have been directly implicated in Pilgrim’s Pride’s price-fixing, though Senate Foreign Relations Committee Chairman Bob Menendez (D-N.J.) and Marco Rubio (R-Fla.) penned a joint letter to Secretary of the Treasury Janet Yellen in August 2021, which pointed to the Pilgrim’s Pride price-fixing as a reason for a broader investigation into “JBS, its holding company J&F Investimentos, and any entity owned or controlled by Wesley and Joesley Batista.”

While the criminal case against the accused former Pilgrim’s executives has already revealed some text-message and email evidence, it’s important to note that the behavior was allegedly common among their peers. The Department of Justice has been investigating price-fixing on a mass scale, not just at Pilgrim’s Pride, but also across the industry’s top 18 companies, which are responsible for some 99% of commercial chicken sold. There are six former executives from other poultry processing firms who were indicted in August 2021, also related to the DOJ’s probe. Their proceedings are still in progress.

Pilgrim’s Pride parent JBS stated, “Pilgrim’s has resolved this matter with the U.S. Department of Justice and is not party to the current trial. We continue to cooperate with the government and remain focused on maintaining our commitment to fair and honest competition in compliance with U.S. antitrust laws.”

In October 2020, Pilgrim’s Pride pled guilty in a settlement with the federal government over the price-fixing charges for $107 million. In January 2021, America’s largest chicken processor Tyson settled for $225 million, while denying liability.

Pilgrim’s Pride, Tyson and Perdue Farms have each secured settlements in some of the civil cases brought forth by fast-food chains and retailers, though hundreds of these other lawsuits will continue to play out in the court system for years. Public settlements from civil suits brought forth by customers that claim harm from increased prices top $75 million for Pilgrim’s Pride, $21 million for Tyson and $14.75 million for Perdue. Tyson and Perdue have continued to deny wrongdoing.

Those settlements complicate the criminal trial of the four former chicken industry executives now in the courtroom. The government turned over more than 14 million documents to the defendants through the three years of legal proceedings. Joining Penn, the former Pilgrim’s Pride CEO, at trial are two other former Pilgrim’s Pride vice presidents and the former president of Georgia-based poultry operation Claxton Family Farms.

“We are not seeing a real focus on the problem of information exchange in the modern world, and agriculture is a great place to start developing standards,” Carstensen says. “You have to inhibit communication and restrict the kinds of info being exchanged. That is a very serious failing of the contemporary justice system.”