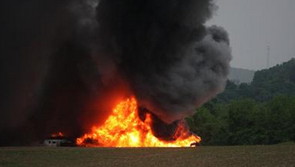 Multiple fire companies from across Berks County responded to a 2-alarm fire at a chicken house Friday night.

Crews were dispatched to the 500 block of Bricker Road in Upper Tulpehocken around 7:45 p.m.

They arrived to find a large chicken house fully-involved and partially collapsed, according to the Strausstown fire chief.

Huge flames engulfed the structure, and within 20 minutes, it was three-quarters of the way collapsed, officials said.

Approximately 64,000 chickens died in the fire, the chief said. The chickens had recently arrived at the farm.

No people were injured.

Officials said the cause of the fire appears to be accidental.