More than 1,000 employees in southern Delaware can return to work now that a chicken processing plant has been allowed to reopen.

Allen Harim Foods’ plant in Harbeson, at the intersection of Delaware routes 9 and 5 west of Lewes, reopened Sunday following a four-day closure.

He confirmed on Tuesday morning that the suspension of USDA inspectors was lifted on Saturday and the plant reopened for business on Sunday.

Officials with Allen Harim have not responded to repeated requests for comment. 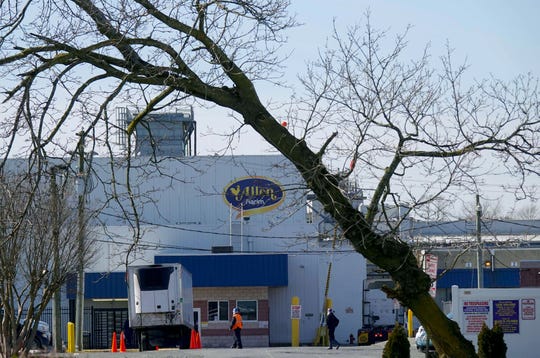 Buy PhotoWorkers move about in the trucking area of Allen Harim Foods’ plant in Harbeson, which was shut down by the U.S. Department of Agriculture Food Safety and Inspection Service on Wednesday for “failure to comply with regulatory sanitary conditions requirement.” The plant reopened on Monday. (Photo: Jennifer Corbett, Delaware News Journal)

The details of the issues flagged by USDA inspectors last week remain unclear, but Delaware Online/The News Journal has submitted a Freedom of Information Act request for more information.

On Friday, USDA spokesman Buck McKay said the agency removed its inspectors Feb. 12. That effectively closes the operation because without the inspectors, the product cannot get the USDA stamp of approval and therefore cannot go to market, he said.

Allen Harim’s plant slaughters, processes and packages millions of chickens every month and, as of 2016, employed about 1,450 people. The facility has previously come under fire related to environmental and worker safety violations, which have cost the company hundreds of thousands of dollars.

Buy PhotoAn Allen Harim Food truck leaves the Harbeson plant on Monday afternoon. The plant reopened after it was shut down by the U.S. Department of Agriculture Food Safety and Inspection Service on Wednesday for “failure to comply with regulatory sanitary conditions requirement.”  (Photo: Jennifer Corbett, Delaware News Journal)

Meanwhile, some Sussex County residents have been fighting a plan to spray millions of gallons of treated wastewater from the plant’s processing operations on farm fields north of Milton for disposal instead of dumping it into the nearby creek.