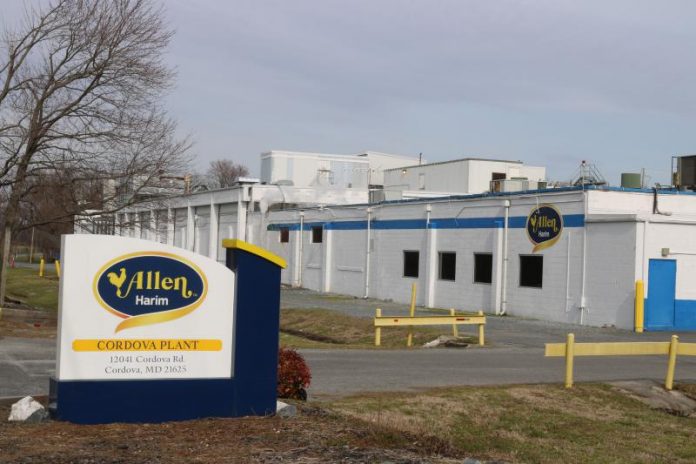 Citing lack of progress on various wastewater-related cleanup issues, the state of Delaware has struck an agreement with Allen Harim Foods that orders the chicken processing company to fix ongoing threats to human and environmental health at its Millsboro and Harbeson plants.

The Delaware Department of Natural Resources and Environmental Control announced the signing of a conciliation order Tuesday that requires the company to reduce its wastewater discharges, improve its stormwater systems and to stop discharging into nearby rivers and streams.

At the same time, DNREC is issuing the company a permit that allows it to dispose of treated effluent via spray irrigation onto Sussex County farm fields.

Allen Harim also agreed to pay a penalty of $150,340 for past failures to report required data and will be subject to additional fines if the noncompliance continues, the order states.

Discharges of poorly treated wastewater into local rivers and streams harm water quality, which in turn turns the waterways into poor habitats for marine life.

“Both DNREC and Allen Harim agree that proactively addressing this noncompliance to avoid protracted formal enforcement actions is in the best interest of the Parties and can be accomplished via this Order,” the document states.

The company is headquartered in Millsboro, where it operates a deboning facility. Allen Harim currently holds an administratively extended federal discharge permit that allows the facility to discharge treated wastewater into Wharton’s Branch, a tributary of the Iron Branch and the Indian River.

In 2018, the company received temporary approval from DNREC to truck 40,000 gallons per day of deboning water from its Millsboro plant to its Harbeson plant for treatment and disposal, as it did not have approval to treat the effluent at its Millsboro plant. Wastewater treated at the Harbeson facility is released into Beaverdam Creek, which leads to the Broadkill River.

At the time of this temporary authorization, Allen Harim had committed to upgrading its treatment capabilities at its Millsboro plant and to transitioning its disposal practices from stream discharge to spray irrigation by June 2020, the order states.

However, though Allen Harim submitted four letters of intent to upgrade its wastewater facilities, the company has not yet applied for any permits to begin the project, the order states.

The company’s latest communication with the state indicated it was not anticipating ending stream discharge until 2023, the order states.

Further, the Harbeson facility had increased its wastewater production between 2017 and 2020, contrary to the terms of the operations permit the state was reviewing. The increase caused state officials to doubt that Allen Harim will be able to meet its obligations once poultry production returns to regular levels post-pandemic, the order says.

From January 2020 through March 2021, Allen Harim has experienced six wastewater-related spills. This includes a pump failure March 1, 2021, that resulted in 500 gallons of sludge being discharged into the river.

These are only the latest violations from the plants related to dumping wastewater and stormwater contaminated with high levels of nutrients, fecal bacteria, ammonia and other contaminants into Beaverdam Creek. In 2018, Allen Harim was cited by DNREC for dozens of violations that occurred between 2012 and 2016.

As an interim measure, DNREC is allowing Allen Harim to continue trucking no more than 40,000 gallons of wastewater per day from Millsboro to Harbeson. But within one year of the order, the state is expecting from the company a permanent wastewater solution for Millsboro.