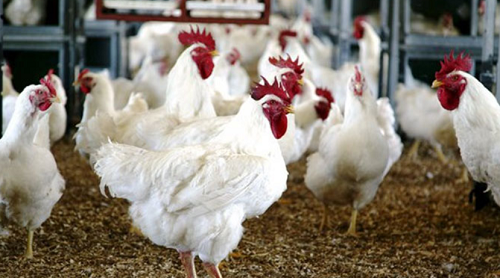 MORE than 40 countries across Europe, Asia and Africa have seen bird-flue outbreaks since May, according to World Organisation for Animal Health data.

It’s threatening to drive food prices, which are near record levels, even higher and boost costs for households that are already suffering from surging prices for other commodities.

Millions of birds were culled in Europe last winter due to the virus, whose highly pathogenic varieties can be deadly to poultry.

Cases this year are rising earlier than usual, forcing countries like the UK to order birds indoors to shield them from the disease.

“It’s an additional factor that will impact food-price inflation,” said Mulder, a global poultry specialist.
“It looks again like it’s a really high-pressure year for avian influenza in Europe and globally.”

A United Nations gauge of world meat prices has climbed 16% this year, and is at the highest seasonal level since 2014.

Farmers are now in a critical phase as cases of the virus typically peak from October to April.

This year’s spread is showing “unprecedented genetic variability” with a wide range of subtypes circulating in wild birds and on farms, according to the World Organisation for Animal Health. Poland, the continent’s largest chicken producer, has culled more than a million birds since early November. Danish turkeys and German geese have also been hit, and

France recently reported an outbreak in egg-laying hens, after a massive outbreak on duck farms in early 2021.

The number of birds affected remains a fraction of overall poultry production. But the risks could weigh on farmer sentiment and discourage expansion, Mulder said. Producers raising free-range hens may also be forced to sell eggs as lower-value barn-raised supply, if the birds are forced indoors for an extended period.

The disease also disrupts trade flows, and the US and Brazil, which top the EU in chicken exports, may grab further market share.

Europe has “tight supply and high prices,” Mulder said. “Taking into account that avian influenza is spreading now so fast over Europe, my view is that this will depress production further.” – Bloomberg.