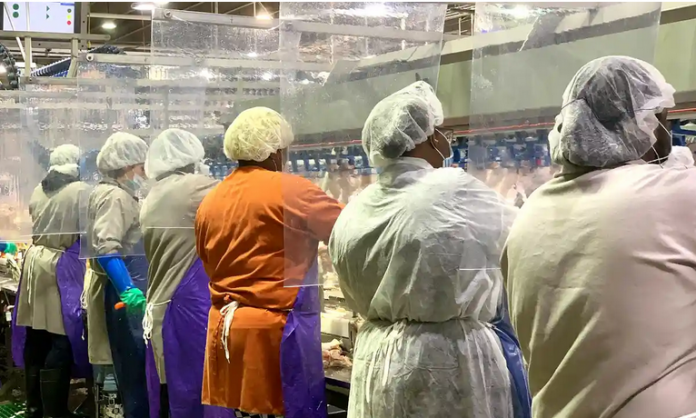 China has suspended imports of poultry products from a plant owned by an Arkansas-based meat processor, Tyson Inc, that has been hit by coronavirus, as authorities struggle to bring an outbreak in Beijing under control.

China’s general administration of customs said on its website it had decided on the suspension after the company confirmed a cluster of Covid-19 cases at the plant, which is located in the town of Springdale.

Tyson’s spokesman Gary Mickelson said the company was looking into the issue, adding that the company works closely with US authorities to ensure its food complies with government safety requirements.

“It is important to note that the World Health Organization, the Centers for Disease Control and Prevention, USDA and the US Food and Drug Administration agree that there is no evidence to support transmission of Covid-19 associated with food,” he said in an email. China also suspended pork products from German pork processor Toennies last week following a coronavirus outbreak among hundreds of its workers.

The move came as the WHO reported a record increase in global coronavirus cases on Sunday, with the total rising by 183,020 in a 24-hour period.

The biggest increase was from North and South America with more than 116,000 new cases, according to its daily report. Total global cases are over 8.7 million with more than 461,000 deaths, according to the WHO. The previous record for new cases was 181,232 on 18 June. Most – more than 50,000 – came from Brazil, followed by the US and India.

But authorities in the capital have stepped up oversight of imported foods after a new cluster of coronavirus cases were linked to a sprawling wholesale food market in Beijing just over a week ago. The city began testing meat, seafood and fresh produce last week and some ports were opening all containers of meat to carry out coronavirus tests.

On Friday, customs asked food exporters to sign a declaration that their produce is not contaminated by the virus.

The new Covid-19 outbreak, centred on the Xinfadi market in Beijing, prompted the swift reintroduction of restrictions in the capital, including residential lockdowns in 40 communities, travel restrictions, and school closures. More than 2 million people have been tested for the virus in Beijing in the past two weeks, according to the state-run Global Times. It said more than 200 people have now been confirmed with Covid-19 in the capital.

On Monday, China reported 18 new coronavirus cases, nine of which were in the capital. Local authorities are restricting movement of people in the capital and stepping up other measures to prevent the virus from spreading following a series of local infections.

Health authorities said Beijing had doubled its nucleic acid testing capacity from 100,000 a day to 230,000 a day.

China and the European Union will hold a video summit on the coronavirus on Monday, their first formal talks since ties soured over European accusations that Beijing has spread disinformation about the coronavirus.

“We are ready to work with China. But we also expect China to assume its responsibilities as one of the world’s largest economies,” said a senior official helping prepare the summit.

Health authorities in South Korea said for the first time on Monday it was in the midst of a second wave of infections focused around its densely populated capital, stemming from a holiday in May.

The Korea Centers for Disease Control and Prevention had previously said South Korea’s first wave had never really ended. But on Monday, the KCDC director, Jeong Eun-kyeong, said it had become clear that a holiday weekend in early May marked the beginning of a new wave of infections focused in the greater Seoul area, which had previously recorded few cases.

“In the metropolitan area, we believe that the first wave was from March to April as well as February to March,” Jeong said at a regular briefing. “Then we see that the second wave which was triggered by the May holiday has been going on.”