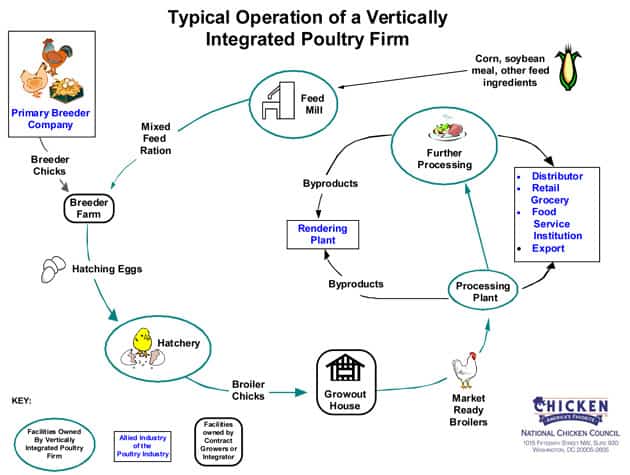 More than a century ago most of our nation’s inhabitants were farmers and most farmers owned chickens. Our country has changed in many ways since those early years. Today a very small minority are farmers, few of whom own chickens. Not surprisingly, the American chicken industry has undergone dramatic change.

In the early days of the broiler business, the major production staging of producing broiler meat were all separate businesses. There were independent feed mills, hatcheries, farms and processors who each sold their product in a separate market.

In the 1940s, the different stages of production were beginning to be combined by “integrators.” The integrators reduced costs by coordinating the production capacity of each stage of production.

The chicken industry has grown to the magnitude that it is today by combining production stages into large vertically integrated firms able to take advantage of rapidly changing technology. Vertically integrated companies in a supply chain are united through a common owner. Usually each member of the supply chain produces a different product or service, and the products combine to satisfy a common need – in this case, the production of broiler chicken.

Today’s broiler chicken has changed dramatically from the barnyard variety of years past, too, and has been specifically bred for meat production.

The efficiency of this system has helped foster lower real prices for chicken products. The broiler industry, in particular, is often cited as a model of the organization which may characterize U.S. agriculture in the future.

What does it mean to you?

Vertical integration of the broiler industry allows producers to combine different biosecurity and sanitation practices, housing technologies and feeding regimens to improve food safety. This structure allows greater governance over each aspect of food safety from the breeder farm to the hatchery through the processing plant.

Vertical integration allows the industry to maintain strict biosecurity measures, vaccination programs and testing for bacteria such as Salmonella at breeder farms and hatcheries. In the feed mill, feed is frequently heat-treated to prevent the spread of any bacteria between the feed and the birds. At the grow out house, strict biosecurity measures, pest management control and the “all in all out” concept controls the spread of disease between the birds, houses and flocks.

Once the birds are removed from the grow out houses, they are promptly delivered to the processing plant where strict testing regimes are in place throughout the plant to minimize the spread of bacteria.

Strict records are maintained and steam lined throughout the entire process regarding testing results, vaccination schedules, biosecurity and sanitation protocols.

Today, more than 90 percent of all chickens raised for human consumption in the United States are produced by independent farmers working under contract with integrated chicken production and processing companies. Most of the other ten percent are company-owned farms and less than one percent are raised by individual growers.

The contract growing system provides many farmers an additional source of income outside of crop farming, livestock farming, or production of other agriculture commodities. When growers enter into an agreement with a chicken processor to raise broilers, they get a guaranteed market and thus avoid market risk (that is, the risk of being unable to sell their products or having to sell at a loss). They also have a reliable source of income and access to production resources such as “technical advice, managerial expertise, market knowledge, and . . . technological advances” (ERS, USDA, 1999) provided by the company.

Contract terms vary from company to company; most outline the division of responsibility between growers and contractors. In general the “grower cares for the chickens, and usually provides land and housing facilities, utilities, labor, and other operating expenses, such as repairs and maintenance . . . The contractor provides chicks, feed, veterinary supplies and services, management services or field personnel, and transportation for the birds to and from the farm” (ERS, USDA, 1999).

Through the contract growing system, processors reduce uncertainties in production and marketing by controlling quality and quantity of their products, and diversify their operations to better meet consumer demands of high quality, economical chicken products.

The chicks are hatched at company-owned hatcheries, vaccinated against poultry diseases, and delivered to the grower’s farm, where he (or she) houses them in large, specialized structures called growout houses. The company also delivers feed, which the farmer distributes to the flock through a mechanical system.

When the birds reach market age and weight in six or seven weeks, the farmer is paid on the basis of weight gained by the flock, which is influenced by the farmer’s skill and good management. This incentive system is considered a time-honored way of rewarding growers who do a better-than-average job. Successful farmers are committed to the business and understand the need to improve their facilities and adapt to changing conditions.

A 1997 survey of Delmarva growers conducted by the University of Delaware Extension Service found that 73 percent were satisfied with their business as poultry growers, and 75 percent were satisfied with their relationship with the companies. The vast majority, 88.9 percent, stated they had a good relationship with their flock supervisor, and that their flock supervisors help them become better growers.

Family-run broiler operations are usually part of diversified farms that are often supplemented by non-farm income. Growing chickens is not usually considered a full-time job, and few families expect to earn their total income from poultry. A typical farm will gross about $50,000 to $75,000 per year from poultry ($25,000 per chicken house).

According to Dan Cunningham, Ph.D., of the University of Georgia, broiler growers earn 4.5 to 7 percent on their initial capital investment while the mortgage is being paid off. This compares favorably with the real income rate of return on assets for U.S. production agriculture of 4.1 percent during this period. In other words, contract broiler growers do as well as, or better than, agricultural producers as a whole,” according to Cunningham.

The system has worked well for decades and has kept tens of thousands of families on small farms who otherwise would have had to get out of agriculture altogether. Most companies have waiting lists of people who want to become growers and lists of existing farmers who want to add capacity by building more growout houses.

An important purpose of contracting systems is to “standardize production practices with the goal of producing a homogeneous commodity” (ERS, USDA 1999). With the current system utilized by the industry, chicken producers are producing consistent, high-quality chicken products for domestic and global consumers to enjoy.