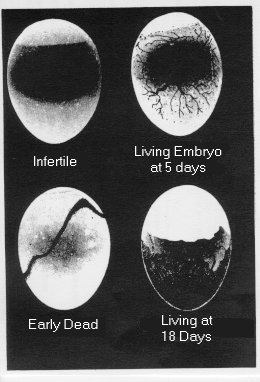 Sometimes it is necessary to test the incubated eggs for fertility. If large numbers of infertile eggs are incubated, they can be found and discarded, and the extra space used for additional eggs. This test will not injure the young embryos and is reliable for eliminating eggs that will not hatch.

Make a tester or candler by placing a light bulb and fixture inside a cardboard box. Cut a small, round hole in the top or side of the box, and let a narrow beam of light escape from the box. You can see the internal features of the egg by placing it against the hole. A darkened room makes testing easier.

The eggs are normally tested after 4 to 7 days of incubation. Eggs with white shells are easier to test and can be tested earlier than dark shelled eggs. Two classes of eggs can be removed on the basis of this early test, “infertiles” and “dead germs.” “Infertile” refers to an unfertilized egg or an egg that started developing but died before growth could be detected. “Dead germs” refers to embryos that died after growing large enough to be seen when candled.

An “infertile” appears as a clear egg except for a slight shadow cast by the yolk. A live embryo is spider-like in appearance, with the embryo representing a spider’s body and the large blood vessels spreading out much like a spider’s legs. A “dead germ” can be distinguished by the presence of a blood ring around the embryo. This is caused by the movement of blood away from the embryo after death.

If you are not sure whether the embryo is alive, place the egg back in the incubator and retest later. A second test can be made after 14 to 16 days of incubation. If the embryo is living, only one or two small light spaces filled with blood vessels can be seen, and the chick may be observed moving. 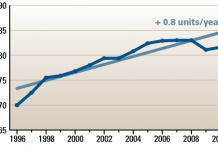 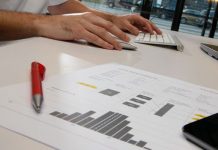 Efficient data management in the hatchery