The broiler chicken industry provides 1,393,739 jobs, $76.5 billion in wages, $347 billion in total economic activity and $27 billion in government revenue, according to an updated economic impact study that highlights the positive impact the poultry industry has on the nation’s economy.  This data reflects almost 200,000 new jobs and an 11% increase in total economic output since the study was last updated in late 2016.

The study was funded by USPOULTRY and was conducted by John Dunham & Associates, based in New York City. The study was updated using the most current methodology available and uses data from 2018. More information on the study’s methodology and model description is available here.

“Chicken producers’ positive economic impact stretches from coast to coast, hits every sector of the U.S. economy and is felt in every congressional district,” remarked National Chicken Council President Mike Brown.  “We know that chicken is nutritious, affordable and versatile, but chicken also means jobs – whether it’s on the farm, in the processing plant, the transportation sector, manufacturing, retail or restaurants.  I want to thank USPOULTRY for funding and coordinating this effort.”

The data is hosted on an interactive website – www.chickenfeedsamerica.com –and can be sorted nationally, by state, congressional district, state house district or state senate district, and county.

In addition to the broiler industry, the study also breaks provides economic data for the turkey and egg industries. 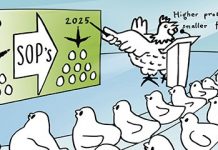