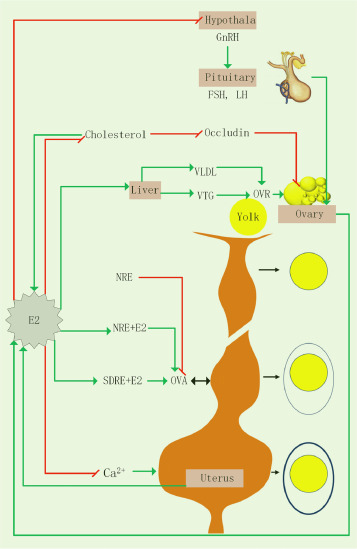 Although many studies have attempted to determine the effect of goose age on egg weight, the relationship remains unclear. We conducted a meta-analysis of the relevant literature in an attempt to provide clarity on this question. We found that goose egg weight changes with age and that he greatest amount of yolk is produced following the second laying season, after which laying performance tends to decline. However, there was considerable heterogeneity among research study results that appears to be caused by ad libitum feed consumption. Interestingly, there have been no studies on the correlation between goose yolk weight and uterine secretions. These parameters change with age and can be easily evaluated through measurements of goose egg component weight in different laying seasons. Following the meta-analysis, we hypothesize that estrogen is a key factor in determining egg weight. Our findings suggest that poultry farms can adjust feed formulations and the duration of light exposure as geese age to optimize egg production. Estrogen concentrations may also be adjusted through diet supplementation as geese age to increase their productive lifespans.

The formation of eggs is an intricate process that can be challenging to research. Many factors underly the quantity and quality of eggs produced by geese and untangling their relative importance can be difficult. For example, studies have assessed ways of increasing the number and weight of goose eggs by improving the nutritional content of feed (Chang et al., 2016). Others have assessed how goose egg weight changes over time as the animals age (Salamon and Kent, 2013). The relationship between goose egg weight and age remains particularly unclear. Most studies suggest that goose egg weight increases with age (Adamski et al., 2016; Biesiada-Drzazga et al., 2016), but others have found the opposite result (Razmaitė et al., 2014). Thus, a meta-analysis aimed at synthesizing previous experimental results would be highly valuable.

It is likely that estrogen has a distinct role in modulating the weight of egg components. Goose eggs pass through six anatomical features during formation: infundibulum, magnum, isthmus, red isthmus or tubular shell gland, shell gland or uterus, and vagina (Kochav et al., 1980; Fernandez et al., 2003). Yolk is produced in the ovaries and enters the fallopian tube. In the next stage, which takes place in the funnel, yolk frenulum and vitelline membrane are formed and fertilization occurs. The egg then moves to the dilated portion of the fallopian tube and stops to form the albumin protein. The egg enters the oviduct isthmus, where the inner shell and the outer membrane of the shell are formed. The deposition of the eggshell begins at the narrowing of the fallopian tube. Then, pigment, calcium, and stratum corneum are added to form the eggshell in the uterus. Finally, the egg is laid through the cloaca (Kochav et al., 1980; Fernandez et al., 2003).

The present study was conducted using a meta-analysis of published research articles. Electronic searches were conducted independently by two of the authors through the PubMed, Ovid, and ProQuest databases, including articles published between January 1st 1975 and May 31st 2020. The following keywords were searched: (goose OR geese OR goosie OR gooses OR goslings OR anser) AND ((eggs weight) OR (egg weight) OR egg-weight) AND (age OR week OR month OR ages OR weeks OR months OR season). Table 1 outlines inclusion and exclusion criteria applied to studies selected for use in the meta-analysis.

Table 1. Criteria for the inclusion and exclusion of studies in the meta-analysis.

Table 2. Characteristics of studies included in the meta-analysis.

A total of 153 studies were initially identified from the literature search initially and four studies were included in the meta-analysis (Figure 1), having met the criteria shown in Table 2. We did not find any publication bias among the four studies selected for inclusion in the meta-analysis, according to the Begg’s funnel plot (Figure 2B). The Egger’s (P = 0.734) and Begg’s tests (Pr > |z| = 0.299) confirmed this assessment. Given the statistical method used to assess heterogeneity in this meta-analysis, egg component weights could not be analyzed for geese of all ages (one to four years old) simultaneously. Therefore, we separated results into three pairwise comparisons for each egg component (yolk, albumen, and eggshell).

The Effect of Goose Age on Total Egg Weight

The weight of eggs produced by one-year-old and three-year-old geese differed (Figure 2A), with eggs from three-year-old geese being significantly heavier (95% CI, -30.27–-26.01). This suggests that egg weight depends on ovulation and uterine secretion changes that occur with age. Heterogeneity was confirmed, as shown in Table 2, and appears to have been caused by ad libitum feeding.

The Effect of Goose Age on Yolk Weight

In other studies focused on chicken eggs, a positive correlation of 0.91 was found between egg yolk ratio (proportion of an egg comprised of yolk) and dry matter content (Icken et al., 2014). Therefore, egg yolk ratio can be used as a breeding index that provides a reference for reproductive traits in laying hens (Icken et al., 2014). Egg yolk ratio is negatively correlated with egg weight, and genetic correlations between egg yolk ratio and egg weight have been evaluated in several breeds of poultry. Studies have found genetic correlations ranging from -0.28 to -0.1 (Rodda et al., 1977). The effect of age on yolk ratio in Hy-Line W36 and Arbor Acres broilers (32–58 and 35–71 weeks old, respectively) has also been studied. The proportion of yolk in both breeds of chickens increased with age (Hussein et al., 1993). This corroborates the results of our meta-analysis, finding that yolk weight increases in the first two years.

Chicken yolk is the main nutrient deposited during follicular growth and sustains the hatching process of young birds (Geng et al., 2018). Under the action of estrogen, the liver of laying hens synthesizes vitelline precursors, namely very low density lipoproteins (VLDL) (Feng et al., 2017). Finally, VLDL is deposited into the yolk. Oocyte vitellogenesis receptors (OVR) are distributed in the fossa of oocytes and mediate plasma protein uptake and yolk formation (Elkin and Schneider, 1994). A hen’s percentage of serum cholesterol contained in VLDL has been found to change with age, similar to our finding that yolk weight changed with age in the studies selected for inclusion in this meta-analysis.

Chicken yolk deposition is regulated by hormones. Follicle-stimulating hormone (FSH) and luteinizing hormone (LH) are the main endocrine hormones involved in follicle formation. They can stimulate ovarian growth and development, accelerate ovarian blood circulation, increase oxygen uptake in the follicular wall, promote yolk deposition, and increase the weight and volume of follicles (Lubzens et al., 2010). Estrogen plays a major role in the liver and is closely related to the synthesis and secretion of yolk. It has been reported that VLDL synthesis increases four-fold after 16 hours of estradiol treatment in roosters (Luskey et al., 1974). In addition, Okuliarova (2018) showed that gonadotropin-releasing hormone (GnRH) and glucocorticoids also regulate yolk deposition (Okuliarova et al., 2018). Hormone concentrations in hens change with age (Lebedeva et al., 2010). Thus, it seems likely that changes in hormones with age can cause changes in ovulation and uterine secretions that in turn affect the weight of different egg components throughout an animal’s lifetime.

The Effect of Goose Age on Albumen Weight

The Effect of Goose Age on Eggshell Weight

The Role of Estrogen in Modulating the Weight of Egg Components

Chicken albumen consists of 75% water, 12% protein, 12% lipid, and a small amount of other substances, such as minerals and vitamins (Kovacs-Nolan et al., 2005). Albumen proteins in eggs are primarily ovalbumin and lysozyme. The main function of these proteins is to protect the yolk from pathogenic invasion (Mine, 2007). When the yolk passes through the front end of the oviduct, protein deposits on the yolk to form a thick inner layer. Then, the oviduct secretes more colloidal protein on the egg to form a middle ring layer. The albumen has no stratification at first. When the egg enters the secretory gland, about 50% water is mixed with the albumen, which increases the total capacity of the albumen and it becomes clearly stratified (Whitehead et al., 1991).

Uterine fluid is full of supersaturated HCO3−, Ca2+ and soluble protein precursors. During the calcification stage of eggshell formation, studies have found a series of specific proteins in the uterine fluid. These proteins are divided into ovocalyxins and ovocleidins, and are closely related to eggshell quality (Rose and Hincke, 2009). Calcium metabolism is another important factor in the formation of eggshells, and the transport capacity of calcium varies in different stages of eggshell formation (Gautron et al., 2001). When the eggshell is first formed, the amount of kinase-family protein with sequence similarity 20, member C, excreted is about 1.5 times higher than the amount produced when the chicken does not lay eggs (Du et al., 2018). All of the above materials mix together to form eggshells (Fernandez et al., 2003). Similar to the results of our meta-analysis, other studies have reported that age can affect eggshell quality (Jiang et al., 2014).

Several genes have been found to correlate with goose egg production. These include the adiponectin gene (Cao et al., 2015), ACSF2 (Yu et al., 2016), and MAGI1(Yu et al., 2017). Other genes relate to eggshell formation, such as those involved in the production of osteopontin (OPN) and calbindin (CALB1; (Shet et al., 2018). In addition, the expression of genes implicated in hormone production and signaling pathways can affect egg laying. For example, the L-Arginine-Nitric oxide pathway can affect the development and formation of follicles in quail (Sundaresan et al., 2007). A large number of studies have shown that nitric oxide, which plays a major role in signal transduction between cells, can affect ovarian function and is an important regulator in ovarian development (de Campos et al., 2020; Guerra et al., 2020). Signaling pathways involved in poultry reproductive control include Hippo/MST Pathway (Lyu et al., 2016) and SLIT/ROBO pathway (Zhang et al., 2017).

Given the above information, we hypothesize that estrogen plays a key role in modifying the weight of egg components. In Figure 6 we outline the steps and relationships between hormones involved in egg production. Specifically, the action of estrogen proceeds through the following steps. The hypothalamus pituitary gonad axis regulates estrogen secretion in vivo. Cholesterol can be decomposed into estrogen and estrogen inhibits cholesterol through feedback regulation. Cholesterol is an important component of occludin and regulates its function (Calderon et al., 1998). Occludin regulates yolk deposition and follicle development (Stephens and Johnson, 2017). Estrogen stimulates the liver of laying hens to release VLDL and vitellogenin (VTG; (Feng et al., 2017). These are then transferred into the yolk through OVR (Elkin and Schneider, 1994).

According to the results of our meta-analysis, yolk is the heaviest in two-year-old geese and declines thereafter. However, uterine secretions may not peak until three or four years of age. There are other factors that influence uterine secretions in the process of eggshell formation and laying, such as upregulation caused by mechanical stretch (Harada et al., 2006). Thus, more research is needed on changes in estrogen concentrations as geese age.

Additionally, there may be differences in egg weight and egg composition among different breeds of poultry (Suk and Park, 2001). Although this study did not find this to be a source of heterogeneity, there are limitations in merging data from different breeds of geese. Additional studies can make up for this deficiency.

We would like to thank LetPub (www.letpub.com) for providing linguistic assistance during the preparation of this manuscript.

The authors declare no conflicts of interest.

© 2021 The Authors. Published by Elsevier Inc. on behalf of Poultry Science Association Inc.

Why Broiler Growers Should Be Concerned about Paw Quality