Virus titration on: Chick embryo fibroblast (CEF) cells. Specific Aim: To determine the virucidal efficacy of 2 doses of powder Stalosan F against IBDV in a surface test for contact times of 5 min, 10 min, 60 min, and 6 hrs.

1. A suspension of IBDV was applied to wells of 24-well microtiter plates @40 µL of IBD/well.

3. Beef extract powder was applied to 12 wells to serve as negative control; four wells each were used to mimic the three doses of Stalosan F. 4. Surviving virus from pairs of wells (one experimental and one control) were eluted in 360µL of eluent (3% beef extract solution in 0.05M glycine, pH 7.2) after 5 min, 10 min, 60 min, and 6 hrs of contact time.

5. The eluted samples were tested for any surviving virus by preparing serial 10-fold dilutions of all eluates and inoculating them in CEF cells contained in 96-well microtiter plates. Three wells were used per dilution.

6. The inoculated cells were incubated at 37⁰C and 5% CO2 for up to two days. The plates were examined after 5 days for CPE using indirect immune florescent assay (IFA).

7. The highest dilution of the sample showing positive CPE was considered as the end point.

8. Virus titers in various samples were calculated by the Karber method (1931).

9. Comparison of virus titers in control and experimental wells indicated the amount and per cent of virus inactivated after a given contact time.

1. Surface test was performed using 10 mg and 20 mg of Stalosan powder with four different contact times (5, 10, and 60 minutes and 6 hours). For each experiment the inoculated cells were washed twice with HANKS solution after 90 minutes of incubation with different dilutions of the samples, and then followed by incubation at 37°C. This approach was successful to avoid the cytotoxic effect of the sanitizer itself on CEF cells. The 90 min was chosen because it enough for the survived virus to attach with the hosting cells if it presents. 2. This experiment was done in duplicate and the results are shown in Tables 1 and 2. 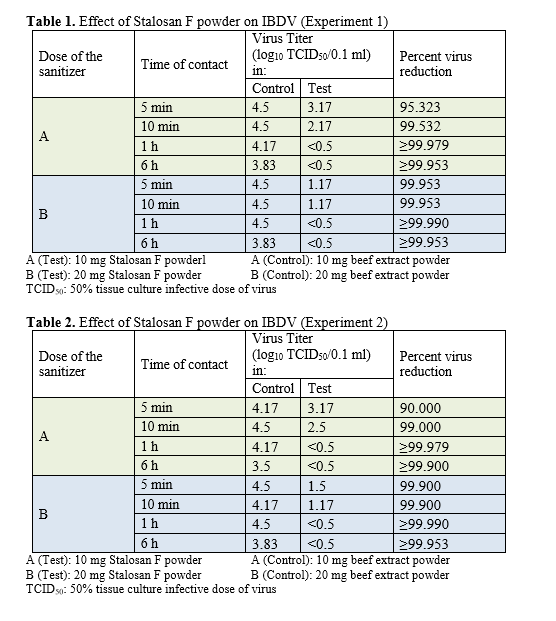 Statistics: Conducting test between the mean value of control and Stalosan F at different time points revealed significant decline in the virus titer due to Stalosan F 10mg and 20mg application (P<0.01). 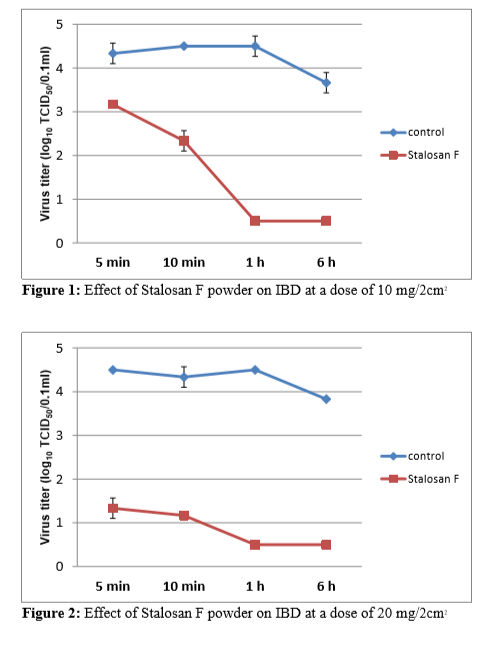