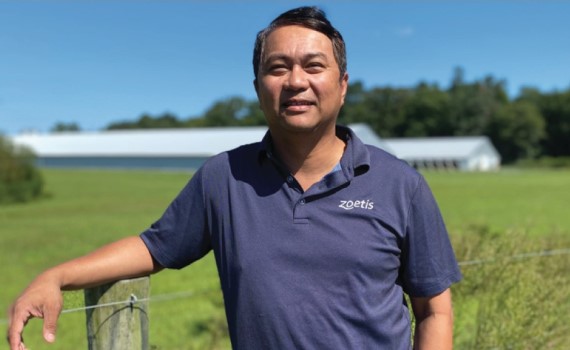 Q: Inclusion body hepatitis (IBH) in broilers isn’t new, but it appears to be on the upswing. Have you seen an increase, and if so, do you have an opinion as to why?

DB: I’ve seen a significant resurgence over the past 2 years, but there is uncertainty as to why. We know, however, that fowl adenovirus (FAdV) — the cause of IBH — can be transmitted vertically from breeders to broiler progeny, so we need to take a close look at the role of breeders. Ironically, better biosecurity and sanitation in modern breeders could play a role. If breeders lack natural exposure, they don’t develop FAdV immunity to pass on to broilers. Another possible reason could be new antigenic-variant strains within the predominant FAdV serotypes that are yet to be fully characterized.

Q: What are the predominant serotypes of FAdV?

DB:  FAdV 8b appears to be predominant, followed by 8a and 11. Other serotypes I’ve encountered are 5 and 9.

Q: Is IBH usually seen along with other diseases?

DB: A good number of production veterinarians suspect that immunosuppressive diseases like infectious bursal disease (IBD), infectious chicken anemia or Marek’s disease can predispose broilers to IBH, then spread horizontally from broiler to broiler. I believe this is likely when there is no clear indication of vertical transmission from breeders or when sister flocks on other farms are not affected. There are also cases where the incidence of IBH and other co-infections such as gangrenous dermatitis (GD) or colibacillosis have been mitigated by live and recombinant IBD vaccines.

Q: Can IBH also occur as a primary disease?

Q: Is IBH a greater problem in certain types of production systems?

DB: It can affect both conventional and no-antibiotics-ever (NAE) systems, but it’s potentially more problematic in NAE systems where antibiotic treatment is limited or not an option. That’s because IBH is also immunosuppressive and predisposes birds to secondary bacterial infections like colibacillosis or GD.

Q: What about the age of onset and seasonality?

DB: IBH has been diagnosed in broilers and breeders as young as 1 week old. Most cases are in 3- to 4-week-old broilers. IBH in birds over 3 weeks of age may indicate horizontal instead of vertical transmission, which coincides with the disappearance of maternal antibodies at around 18 to 21 days. The disease can occur year-round if breeders are infected and pass it on to broilers. In broilers, the incidence and severity of IBH, like many diseases, tends to be worse from winter to spring, probably due in part to pathogen build-up when chicken houses are closed up in cool weather.

Q: How high is mortality due to IBH in broilers, and what about the consequences for birds that survive?

DB: Mortality ranges from severe — 20+ birds per 1,000 per day — to moderate — three birds per 1,000 per day. It usually spikes 3 to 5 days post-infection and decreases after 7 to 10 days. Birds that survive generally have poor growth and uniformity, and secondary bacterial infections. Plant condemnation rates may be elevated.

Q: What are the consequences in older affected birds?

DB: Older broilers may show few signs of disease and tend to recover quickly, since their immune systems are more developed at the time of infection. Adult breeders also may have few to no clinical signs for the same reason but can still pass on the infection to broilers.

Q: How does a producer know flocks have IBH?

DB: Typically, birds are depressed, and there’s a sharp increase in mortality at about 2 to 4 weeks of age. Broilers from breeders actively shedding the virus — vertical transmission — will see an earlier onset at 1 to 2 weeks of age and higher mortality.

Q: You were a poultry diagnostician for nearly 20 years. What would you say is the most useful method of diagnosing IBH?

DB: The signs of IBH on necropsy are telling. The liver is enlarged, yellowish and fragile. There are hemorrhagic patches as well as pale, necrotic lesions on the surface with a net-like pattern. Some birds have excess clear fluid inside the sac covering the heart. Others are jaundiced with yellow skin and body fat; that’s due to acute liver failure. The kidneys may be pale and enlarged, and I’ve also seen hemorrhagic lesions in the pancreas. The clinical diagnosis of IBH is confirmed by histopathology. There are basophilic intranuclear inclusion bodies in affected liver tissue. After positive histopathology findings, the FAdV serotype can be determined by virus isolation and gene sequencing.

Q: Are there blood tests that can help diagnose IBH?

DB: Breeder flocks can be screened with ELISA for FAdV to identify exposure, but the results have to be interpreted cautiously because adenoviruses are so widespread. The results can be useful if they can be compared to a normal-flock baseline obtained before an IBH outbreak.

Q: How do you advise producers proceed if their flocks have IBH?

DB: I strongly recommend ruling out other immunosuppressive co-infections that can make IBH worse. When IBH breaks, biosecurity measures and traceback serological testing on source flocks should be immediately instituted to determine the extent of the disease spread. If possible, don’t hatch eggs from breeder flocks implicated in IBH outbreaks, to limit spread until viral shedding stops. If IBH reaches a level of economic significance, it’s time to consider adding an inactivated autogenous vaccine with the predominant FAdV field isolate or isolates into the pullet breeder program. The serotypes involved need to be identified early on during an outbreak since preparing an autogenous vaccine takes time. Remember that FAdV serotypes seldom cross-protect, so it’s very important to match the vaccine to the field isolate.

Q: What other vaccines do you recommend to help control IBH?

DB: I advise administering the FAdV autogenous vaccine with IBD and reovirus vaccines, which should be injected into broiler breeder pullets before lay.

Q: How often are autogenous vaccines used for IBH, and how helpful are they?

AM: Autogenous vaccines for IBH are popular and effective in preventing IBH infections in breeders, which in turn protects broilers from vertical transmission. Many US broiler companies experiencing IBH problems vaccinate their pullets with an autogenous FAdV inactivated vaccine, often combined with IBD and reovirus vaccines, once or twice between 9 and 18 weeks of age. Even if you have the right serotype in the vaccine, it’s not going to mitigate IBH if the vaccines aren’t administered correctly and at the right dose and time.

Q: Do you have any other advice for producers concerned about IBH?

AM: Recognize and identify IBH quickly so disease-control measures can be initiated. Consider heating the affected house for several days, windrow litter to adequate temperatures, clean and disinfect, implement extended downtime between flocks and add litter amendments to reduce the viral load in the houses. FAdV is a durable virus and it can be spread by people or shared equipment, so maintaining enhanced biosecurity on affected farms is essential to prevent spread of the disease to other premises. Stress may also play a role in triggering IBH and increased viral shedding. The onset of lay, spiking males and hot weather are major stressors that could lead to reactivation of latent FAdV in long-lived hens, so it’s wise to minimize stress on these birds as much as possible.

All trademarks are the property of Zoetis Services LLC or a related company or a licensor unless otherwise noted.

TOOLBOX, Issue 27
Toolbox is a series of interviews with veterinarians and other technical specialists about their experiences managing antimicrobials, vaccines and other tools for poultry health. It is produced by the editors of Poultry Health Today on behalf of the US Poultry Business of Zoetis.