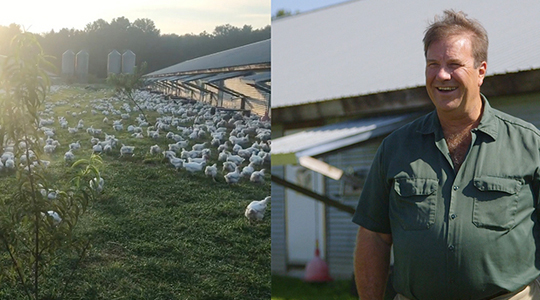 Third-generation farmer Andrew McLean of Centreville, Md., who raises organic chickens for Perdue, won the company’s first Chicken Welfare Free-Range Pasture contest to get the most chickens outside.

Perdue Farms, a global leader in animal welfare, has announced the winner of its first Chicken Welfare Free-Range Pasture contest. Sixteen farmers participated in the contest that tapped their knowledge and experience in getting the most chickens to go outside, enabling them “to do what chickens naturally do.”

Third-generation farmer Andrew McLean of Centreville, Md., who has raised organic chickens for Perdue since 2015, won the contest and its $2,000 first-place prize. “When Perdue put out the call for the contest, I thought it fit what I’m doing here very aptly. I’ve always had a lot of chickens coming out and I enjoy seeing them come out and do what chickens naturally do. I’m very happy to tell people about how I do it,” said McLean.

Some of the techniques McLean has implemented include allowing grass to grow at different heights to provide habitat for birds of different ages and planting fruit trees in his pasture, which provide shade and an additional feed source. A video showcasing McLean’s winning contributions can be viewed here.

“We try to take as good care of our chickens as we can. We make sure that what we are producing is a healthy, safe product that is also grown with the highest standards of animal welfare,” said McLean.

The contest was developed as part of Perdue’s “Commitments to Animal Care” and ongoing efforts to ensure the independent farm families who care for its chickens are engaged in the company’s efforts to be a leader in animal welfare. As part of its commitment, Perdue has evolved beyond the basics of food, water, shelter and protection from disease to explore not only what chickens need, but what they want.

Farmers participating in the contest filmed their birds outside in the free-range pasture and provided insights and data on the techniques they believed were most effective in enticing birds outside, such as the types of ramps they use, their routines, landscaping and more. In January 2021, Perdue will launch a second free-range contest to engage farmers to increase the number of chickens using the pasture. Results will be announced in August 2022.

Today, Perdue is raising more than 25 percent of its chickens with outdoor access and continues to expand.

“Perdue is demonstrating its continued leadership in the poultry industry,” said Josh Balk, vice president of farm animal protection for the Humane Society of the United States. “This trajectory of an increased percentage of barns providing outdoor access — along with its work increasing the number of its barns with windows and environmental enrichments — improves the quality of life of the birds and sets a bar where other major players in the poultry industry should go.”

As Dr. Bruce Stewart-Brown, Perdue’s senior vice president of technical services and innovation, explains, “Long-term, we don’t just want to increase the number of houses with pastures, we want to increase the number of birds using that pasture. At Perdue, our family farmers are experts at raising healthy and happy chickens, and that’s why we try to learn from them and invite them to help us improve our animal welfare practices across the board. We look forward to sharing their knowledge and expertise with other farmers and seeing the positive impact on creating a better environment for our chickens.”

In 2016, Perdue introduced its ground-breaking Commitments to Animal Care program, challenging the status quo on how the majority of chickens are raised in the United States. Progress since this announcement has led Perdue to become one of only two U.S. poultry or meat companies to achieve Tier 2 status or higher in the global Business Benchmark for Farm Animal Welfare.

The Perdue Commitments to Animal Care is a four-part program to accelerate the company’s progress in animal care giving its chickens what they want, strengthening relationships with farmers, building trust with multiple stakeholders and creating an animal care culture for continuous improvement. In the last year, Perdue has made progress in raising more birds with outdoors access; testing the feasibility and benefits of on-farm hatching to improve early chicken care; collaborating on a first-of-its-kind animal welfare research with an animal advocacy group; and opening three Poultry Learning Centers, which are viewing farms that provide an interactive experience for visitors to learn about poultry farming and proper animal care.

“It is truly refreshing to see Perdue’s efforts involving farmers in their goal to improve poultry welfare,” said Dr. Leonie Jacobs, assistant professor of the animal behavior and welfare group at Virginia Tech University, in the Department of Animal and Poultry Sciences. “A well-designed pasture, from the birds’ point of view, provides an excellent opportunity for birds to express highly-motivated natural behaviors. The ability to have a choice, and to show these important behaviors, is key for the welfare of any animal.”