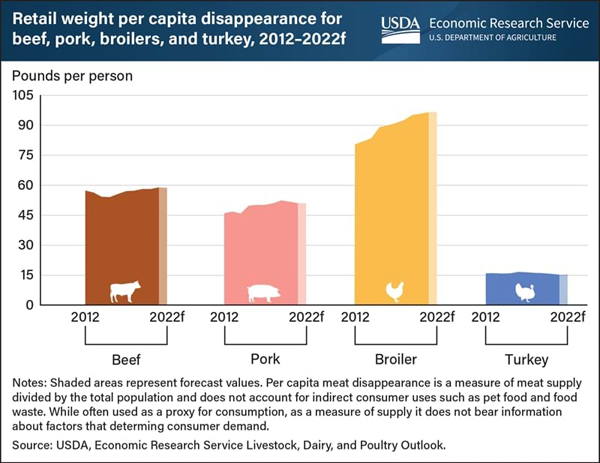 Per capita red meat and poultry disappearance is expected to modestly decrease in 2022. While it is often used as a proxy measure for consumption, per capita meat disappearance is a measure of the supply available for use in domestic markets, including fresh and processed meat sold through grocery stores and used in restaurants.

The latest USDA forecast indicates that in 2022, U.S. consumers will have access to 224.6 pounds of red meat and poultry on a per capita retail weight basis. This forecast is 0.2 pounds lower than last year, and 10.3 pounds higher than the 2012-21 average. Looking at the main protein species, 2022 per capita disappearance for beef and pork is expected to decrease by 0.34 and 0.20 percent, respectively, because of lower livestock inventory.

Disappearance for broilers and turkey is expected to increase by 0.11 and 0.35 percent, respectively. Sustained by a steady production growth trend, 2022 broiler disappearance adds to a decade-long stretch of year-over-year increases. The increase in turkey disappearance marks the first year of increase since 2016.

This chart first appeared in the USDA, Economic Research Service’s Livestock, Dairy, and Poultry Outlook, March 2022 and has been updated with recent data.