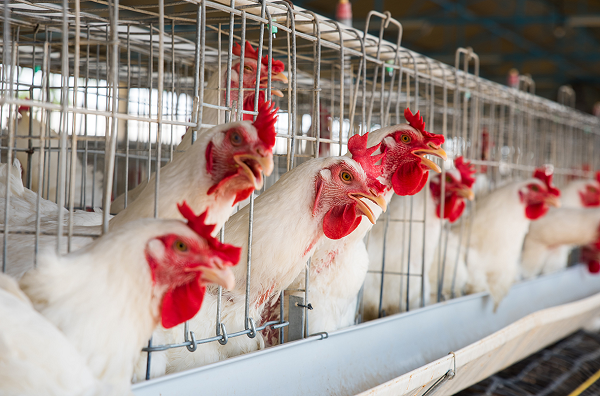 Chickens make more sounds than most of us realize. They cluck when content, squawk when frightened, and sing “buk, buk, ba-gawk” when laying an egg. Their chicks vocalize too, and they can vary that simple sound to signal pleasure or distress. Now, scientists have developed an artificial intelligence (AI) program that automatically identifies these SOS calls, an advance that could help farmers save thousands of fledgling lives—and millions of dollars in farm labor.

“The results are an important next step toward a flock welfare indicator,” says Bas Rodenburg, an animal welfare scientist at Utrecht University not involved with the study. The work could even change public attitudes toward factory farms, he says. In general, the public at large prefers to consume chickens—and farm animals in general—from empathetic producers who care about their animals’ welfare, other researchers have shown.

Early in life, chicks utter distress calls—high-pitched, repetitive chirps—to attract the attention of their mother hen, whom they rely on for warmth and food. She responds with food calls, showing the chicks where to forage. But in a commercial chicken barn, chicks call out when they’re uncomfortable, socially isolated, or hungry. Answering these calls can be the difference between life and death: Ignored chickens are more likely to lose weight and die prematurely. Animal welfare scientists have been trying to develop automatic methods to help farmers better spot these situations.

To improve these efforts, researchers at the City University of Hong Kong recorded the vocalizations of chickens housed at Lingfeng Poultry Ltd., a major poultry producer in China’s Guangxi province. The birds are kept in stacked cages (three cages per stack, and 13 to 20 individuals per cage), with about 2000 to 2500 chickens in each barn.

Over the course of a year, the researchers recorded the environment, picking up everything from natural farm sounds such as workers hosing down barn floors to the chick distress calls. They then transformed all of these noises into sound pictures known as spectrograms and used the images to train a type of AI program called deep learning. Similar programs have been developed to recognize the emotional states of cows on dairy farms.

Using the recorded sounds from the barns as well as sounds made in real time in a live demonstration, the algorithm rapidly and successfully identified 97% of distress calls as the chickens were making them, distinguishing these from other chicken sounds and from general barn noise, the team reports today in the Journal of the Royal Society Interface.

Still, “more work is needed” to make the research “commercially viable in real world settings,” says Marisa Erasmus, an animal behavior and welfare scientist at Purdue University who was not involved with this study—a fact the Hong Kong scientists acknowledge, too. Nevertheless, because the approach worked in real time when chickens were making distress calls, it’s a big advance, she says. It “brings researchers one step closer to being able to monitor farm animals’ health and welfare automatically.”

She and Rodenburg can imagine, for example, a warning system in a large, commercial farm alerting workers to a specific cage where a chick is in distress, so they can provide necessary and timely care. And that could lead to a future with many more happy clucks.