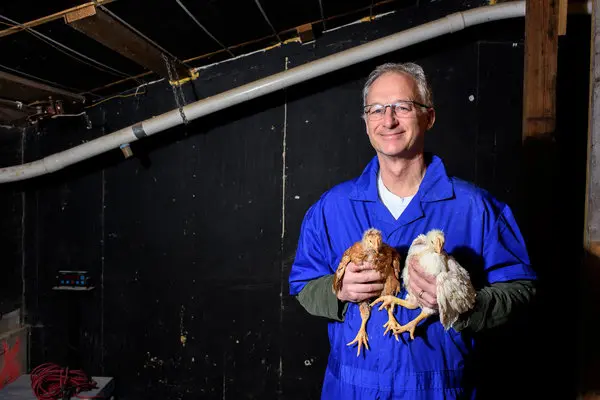 Management techniques adopted to cope with COVID-19 production challenges led to improvements in bird health and welfare for many poultry producers.

Bruce Stewart-Brown, DVM, senior vice president of technical services and innovation at Perdue Farms, said the pandemic affected nearly every part of the company, forcing the company to make interventions to respond to changing consumer demands.

But he said the measures Perdue Farms adopted, including reducing bird numbers in the field, led to “as good or better than normal” flock health.

When the food-service sector went down in March 2020, food-service plants had chickens already in the pipeline with no place to go with them, Stewart-Brown told Poultry Health Today. There was also a dramatic decrease in the need for big-bird deboned meat.

Tray-pack accelerated, but it was difficult to get the birds in the right place and the right plant, he said.

Fortunately, Perdue Farms has all three types of plants, but the company couldn’t just stop growing birds. In addition, company officials had made a commitment to avoid depopulating herds.

“We ended up slowing some birds down in the field to keep them at the right weight,” Stewart-Brown said. “The plant doesn’t want a bunch of birds that are a pound heavier than normal so you have to figure out how to meet the weight spec and meet it at a time that the plant can handle the chickens.”

Interventions taken by Purdue at the time included:

The initiatives were successful. “It took birds 10 days longer to get to their target weight, which gave the plant a break, allowing it to operate more successfully,” Stewart-Brown said.

Once the company could decrease the number of eggs placed in the hatchery, fewer birds were placed in the field so they could be spread out over existing farms. Birds had more space, which had positive health impacts.

“We saw really great footpad health. And livability was as good or better than we typically had seen [in the spring],” Stewart-Brown said. “There were good net benefits to the kinds of management changes that went on.

“In general, the industry needs to continue to look at placement density,” he continued. “We’ve been increasing the amount of space for the last 5 years, trying to understand the net benefit to the chicken, as well as figuring out how to pay the farmer for the lower number of chickens on the farm.”

He stressed the importance of paying attention to the needs of the bird, and space is one of the factors that should be closely evaluated.

However, Steward-Brown said there may be some extenuating circumstances that led to the improvement; people might have stopped going to the hospital or doctor during the pandemic, or they might have been more careful in how their prepared their meals when eating at home.

Another factor associated with fewer cases of Salmonella could be the change in litter in the barns, Stewart-Brown noted.

“I have always believed that probably the number one, best food-safety intervention on a broiler farm is dry litter, and that’s been a focus for us,” he said. “I’ve also thought that footpad health and Salmonella carriage are a couple of metrics that relate to each other.