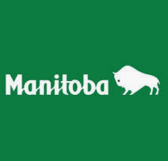 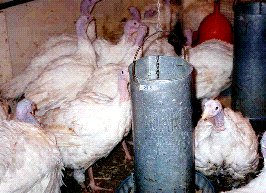 This book is the second of two guides covering poultry feed withdrawal and its effect on contamination at processing. Phibro Animal Health has supported the reproduction of this guide as a service to poultry producers in Manitoba and to poultry producers worldwide. For additional information, please contact Phibro Animal Health (1-888-403-0074) or visit their website (www.phibroah.com).

The guide outlines normal consumption patterns and explains how various factors may alter those patterns. Most importantly, it explains the windows of processing opportunity for turkeys and details why those windows occur. The guide also outlines how feed withdrawal affects yield and shows pictures of actual intestines after various periods of feed and water withdrawal.

Feed and water are removed from turkeys prior to slaughter to prevent digesta and feces from contaminating carcasses. Contamination results when intestinal contents are found on or in the carcass. Contaminating materials may consist of feed, feces, bile, litter, or a number of other items.

Contamination can be kept at low levels only when an ongoing program is in place. Each person on a complex affects contamination and therefore, needs to know as much as possible about the problem. Some questions that staff should be able to answer include:

Young poults eat in a steady state pattern, eating every few hours during the day. After each meal, they drink some water and liquefy part of the feed in their crops. The liquefied feed passes to the stomach (proventriculus) and gizzard, where it is mixed and squeezed into the duodenum, leaving dry material in the gizzard. The turkeys then drink one or two times more until all the feed in their crops has liquefied and passed into the stomach. Once the crops have emptied, birds will try to return to the feeder.

If possible, turkeys will consume feed in many small meals, a pattern known as true steady state eating. If they have difficulty getting to feed during certain periods, they will consume more feed when they do get access to it. For example, housing density during later growout prevents many birds from eating for extended periods because they cannot get to feed and water. Any factor that prevents steady state eating can result in binging when the birds get access to feed.

Each of the following items affects the birds’ eating and, ultimately, drinking patterns.

Poultry houses have two environments: the litter and the few feet above the floor. Turkeys will choose the environment in which they are more comfortable.

Passage time, even after binge feeding, is rapid in turkeys. It appears that two hours of water consumption after feed withdrawal is adequate to solubilize and pass all of the feed out of a turkey’s crop. Thus, the entire intestine is empty in 4 to 6 hours after a meal. If the turkey is taken off water two hours after consuming feed it will have dry intestinal contents at 6, 8,…22 hours. The longer the bird has access to water, e.g., 4, 6, or 8 hours, the greater the problem of wet, runny intestinal contents, regardless of the number of hours off feed to kill. With a watery intestine (4, 6, 8 hours of water intake) the cecal material becomes very watery, and the dripped cecal material can be expelled.

Determining When Turkeys are Off Feed and Water

It is important to recognize that the time at which the feed pans are raised is not the same time that turkeys go off feed. Turkeys are off feed when they stop eating. If they can find something to eat, it must be assumed that they will eat. Two examples help to illustrate this principle:

In addition, if birds are held for excessive periods at the processing plant, they will consume feathers and droppings from the cage floors of the live haul truck. This situation can affect contamination as well. The situation is similar for water consumption. If feed is accessible, a turkey eats and then drinks the amount necessary to liquefy and pass feed out of its crop. After its crop is empty, the bird becomes hungry and eats again. The crop may be emptied in an hour or less with only two trips to the drinker during the day. If the turkey normally binges at 6:00 p.m., it may drink 5 or 6 times prior to 8:00 p.m., when lights, air temperature, air movement, or previous training prevent movement for any more feed or water. If water is available too long after feed has been removed prior to catching, turkeys that become hungry may drink excess water. Timing of water removal following feed removal is critical. The pictures shown on the following pages show the results of adequate versus excessive water intake following feed removal.

How Time Off Feed and Water Affects Yield

For example, increasing withdrawal times by 10 hours (from 7 to 17 hours off feed), would result in the following weight changes:

In addition, leaving turkeys on water during cool weather (for longer than recommended) does not measurably increase bird weight or percent carcass yield but does yield wetter intestinal contents.

Over time, the weight of turkeys’ viscera decreases proportionately to the weight loss of the carcass. Unlike broilers, turkeys do not slough the intestine as they lose intestinal weight. Turkeys taken off water early have very dry intestines at all processing times. This characteristic may be due to age at processing or reabsorbtion of fluid released between the windows.

Turkeys left on water four, six, or eight hours after they have stopped eating have progressively wetter intestinal contents with greater associated processing weepage and contamination. Increased contamination is almost nonexistent between the first and second windows when no excess water is consumed. However, this spike is very evident if turkeys are allowed 4, 6, or 8 hours of water consumption after the last meal.

There are two windows of processing opportunity for turkeys. Both are based upon times at which the intestinal tract is driest, the ideal time for processing. If these windows are not used, higher contamination will likely result.

The first window starts as soon as the crop, stomach, gizzard, and intestines have passed most of their contents. This window remains open until the intestinal mucosa sloughs and the intestine becomes watery and full of gas. Cecal content contamination is rare during this period.

The second window starts after most of the sloughed intestinal mucosa and resulting watery contents released from the lining are passed out of the bird. Cecal content contamination is likely between the windows and remains a problem during the second window. Limiting excess water consumption after feed removal will minimize contamination problems both between and during processing windows.

In a normal steady state eating pattern, the intestine is usually empty after 6 hours. This period opens the first window of processing opportunity. This window remains open through the 12th hour but closes with excessively runny intestines during the 14th and 16th hours off feed, if the birds were allowed more than 2 hours of water following feed withdrawal. By the 18th hour off feed (the 2nd window), the intestinal runniness has improved but 4, 6, and 8 hours of water intake following feed removal still results in watery intestinal contents.

If a turkey drinks only enough water to pass the last feed consumed, a dry intestine will result. A turkey with a dry intestine poses few contamination problems even if processed between windows. A turkey that has consumed excess water following feed removal may be suitable for processing during the first window, but will cause significant problems between the windows and in the second window. Managing final water consumption following feed removal, so that only enough water to solubilize and pass the final feed out of the birds’ crops, is the most important tool for reducing contamination. Limiting water consumption after the turkeys’ last meal to only the amount necessary to pass the last feed consumed requires close planning, monitoring, and management.

Limiting water to only the amount needed to pass the last feed in the crop will result in:

However, care must still be taken to prevent excess bird dehydration during hotter months.

The easiest and most effective method for minimizing contamination at processing is to carefully manage feed and water consumption during the final hours before processing. Two windows of opportunity exist: The first window is from 6 to 12 hours off feed and the second window is 18 – 24 hours off feed. Reaching these targets for processing requires planning to determine when the birds need to come off feed, monitoring water intake during the last 24 hours before the birds come off feed, and managing the amount of water to be given once the feed has been removed.

The following photos illustrate the differences in intestinal contents and condition at various stages of feed and water withdrawal.

0 Hours off feed – 0 hours off water, Hen (before the first window)

Bird has eaten recently. Dry feed is found in the crop and the digestive tract contains feed. Gall bladder is small. 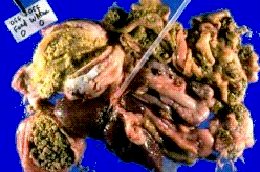 4 hours off feed – 2 hours off water, Poult (before the first window) 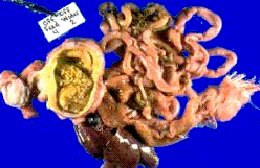 The intestines are totally emptied, not weeping, and shrinking. They are very flat and curl rapidly when opened. 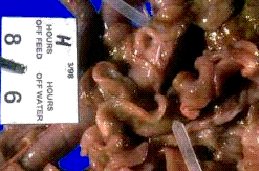 These four slides show a very dry intestine with 2 hours of water following feed removal, compared to 4, 6, and 8 hours of water. Note the progression of watery contents with more water consumption and the watery cecal material in both 14:8 and 14:6. 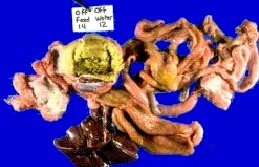 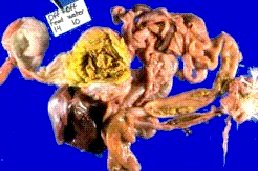 14 hours off feed – 8 hours off water, Poult (late in the first window) 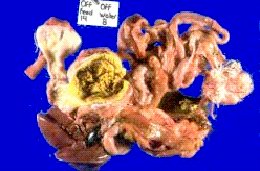 14 hours off feed – 6 hours off water, Poult (late in the first window) 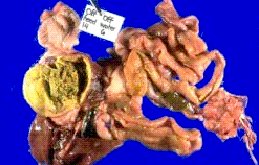 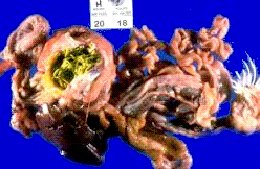 The difference in intestinal moisture is very evident with more drinking time, and the cecal contents dumped into the intestine are very watery with 4 hours of drinking time. 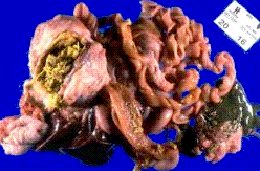 A comparison of these four slides show that additional hours of water consumption result in wetter intestines. 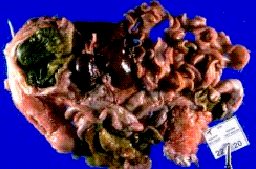 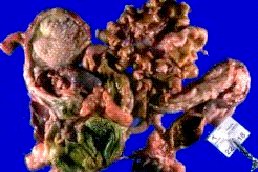 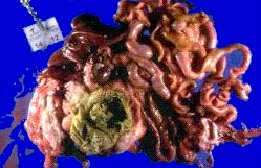 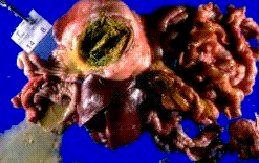 The text and pictures in this factsheet have been reprinted with the permission of Dr. Stan Savage. Phibro Animal Health has given permission to reproduce this material based on the original factsheet published in 1998.