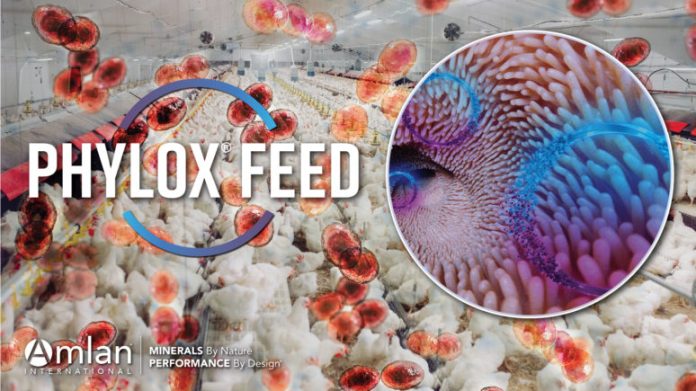 The negative impact that coccidiosis has on bird health and production economics make it a constant challenge for poultry producers. Total eradication of Eimeria species from the poultry house is unlikely, so producers focus instead on suppressing coccidia to prevent subclinical disease performance loss, or worse, a clinical outbreak.

There are multiple options available for managing coccidiosis in poultry, including vaccination, and anticoccidials (synthetic chemicals and ionophores), although producers desire to move away from pharmaceutical solutions or harsh chemical additives, and concerns regarding resistance persist. A new natural alternative to anticoccidial drugs and vaccines — that provides equivalent performance — is Phylox® Feed. In this post, we provide an overview of each coccidiosis control method and share data on the comparable efficacy of Phylox.

Administered to day-old chicks, vaccines targeted to specific Eimeria species stimulate the bird’s immune system and provide some immunity before they are exposed to wild-type Eimeria. Vaccination also aims to reduce the severity of coccidiosis symptoms if infections occur. However, live virulent vaccines — and to a lesser extent live attenuated ones — can still cause damage to the intestine that can affect performance that has to be overcome with sufficient grow out time and compensatory gain.   It is also important to note that birds are also not protected against all Eimeria strains, just those included in the vaccine dose itself.

There are multiple anticoccidial drugs available that are made from synthetic chemicals, all of which have different modes of action. Commonly used prophylactically to prevent outbreaks, these chemicals disrupt the Eimeria life cycle by working as either a coccidiostat or a coccidiocide. While they are effective, extended use of most anticoccidial chemicals can promote the emergence of drug-resistant Eimeria strains. Different programs can be used to help slow or stop resistance, such as bio-shuttle or rotation programs. Use of anticoccidial chemicals may also require a withdrawal period prior to slaughter.

Ionophores Are Effective — If Their Use Is Permitted

Ionophores are produced by the fermentation of microorganisms, and unlike anticoccidial chemicals, the mode of action of all ionophores is similar. They form a complex with ions (e.g., calcium, sodium, potassium) and transport this complex across the Eimeria cell membrane. This alters the electrochemical gradient and the cell dies. Ionophores are not effective against all coccidia life cycle stages. They can be used long-term and ionophore/synthetic chemical combination anticoccidials are available in some markets.

Ionophores also have some antibacterial activity, which has led to their classification as antibiotics in some regions. This has meant restriction of ionophore use in antibiotic-free production systems in those areas.

A Natural Feed Additive That Addresses the Shortcomings of Other Anticoccidials

Natural feed additives are available for producers looking for pharmaceutical-free anticoccidial solutions that can be used in a “no-antibiotics-ever” (NAE) production system. Amlan International recently launched Phylox Feed (available in select international markets), a natural alternative to anticoccidial drugs and vaccines. Phylox can be effective in a rotation strategy when resistance is a concern and can also be used with Amlan’s mineral-based products to help maintain gut health and improve efficiency.

Phylox is a synergistic blend of antiprotozoal phytochemicals that have multiple modes of action against the Eimeria life cycle. These actions include disrupting the Eimeria cell membrane and preventing oocyst sporulation and replication. Phylox also energizes host intestinal cells to create a strong intestinal barrier to resist disease and lightly primes the immune system by enhancing antigen presentation.

In multiple third-party trials, including in broilers raised in floor pens, Eimeria-challenged broilers fed Phylox had equivalent or numerically improved performance compared to broilers administered industry-standard anticoccidials. This included vaccination, a bio-shuttle program, as well as when anticoccidial chemicals and ionophores were tested.

Similarly, in a study at the University of Arkansas, broilers raised in floor pens and fed Phylox had improved key performance indicators compared to the challenged control. Phylox also showed a numeric performance improvement in body weight compared to all tested industry anticoccidial standards, including vaccination and bio-shuttle with salinomycin, and statistically heavier body weight when compared to the treatment receiving an anticoccidial vaccine alone.

Additionally, Phylox did not interfere with vaccine efficacy when fed concomitantly, as Phylox provided equivalent results for all measured variables when it replaced salinomycin in a bio-shuttle program for broilers.  The performance of Phylox when fed on top of vaccination, and also in replacement for Salinomycin in a bio-shuttle program were important findings in this study as they demonstrated that Phylox is effective in preventing coccidial reinfection in poultry either through a reduction in oocyst shedding, or via the degradation of ingested oocysts in the gastrointestinal track before they are able to cause a significant incidence of the disease.

Phylox Feed fills the gaps that are missing from other coccidiosis control methods: it can be used in NAE programs, has no withdrawal requirement, won’t promote the emergence of drug-resistant coccidia and isn’t targeted to only specific Eimeria strains. Phylox can also have value in broiler breeder and/or table egg pullet replacement programs to prevent significant disease breakthroughs during the development of bird natural immunity.  For more information on how to incorporate Phylox into your coccidiosis control program, contact info@amlan.com.