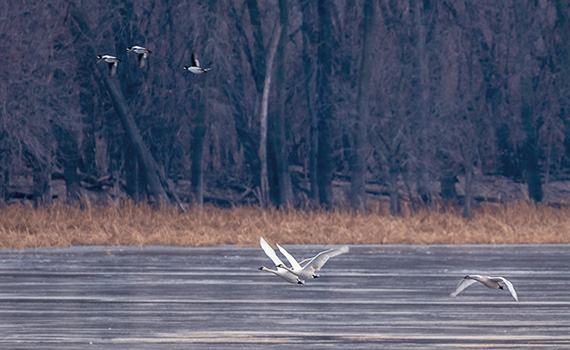 A warning to tighten up biosecurity and reduce movement in and out of poultry houses was issued by Terry Conger, DVM, poultry health epidemiologist with USDA’s Animal and Plant Health Inspection Service (APHIS).

The warning came as outbreaks of highly pathogenic avian influenza (HPAI) occurred along the Mississippi Flyway for migratory waterfowl. Earlier HPAI outbreaks were reported along the Atlantic Flyway, which can mingle with the Mississippi Flyway. Outbreaks in both areas involved commercial and non-commercial poultry operations. And recently, outbreaks were reported in the Central and Pacific flyways.

“Migratory waterfowl and other wild birds play a major role in introducing the [HPAI] infection into flocks, and once in a facility, it can spread like wildfire through the movement of fomites,” Conger said. He spoke during a recent University of Arkansas Ag Research and Extension webinar on HPAI.

The latest HPAI outbreaks in the US are caused by the serotype H5N1, known as the Eurasia strain. Conger said H5N1 is an ongoing, rapidly spreading strain that has been prominent in Europe, Asia and Africa. The first HPAI H5N1 outbreak in the Western Hemisphere occurred Dec. 23, 2021, in Newfoundland and has continued to spread into the US.

“Due to the perpetual risk of HPAI from waterfowl, the only preventive tool we can rest our hopes on is stringent biosecurity,” Conger said.

“Contract growers and non-commercial flock owners must buy into biosecurity to protect their individual flocks because HPAI is here,” he added. “Biosecurity must become a part of life if you oversee a commercial or backyard flock. It must be as automatic as eating and sleeping.”

While migratory waterfowl are the most common initial source of HPAI infection, human error is also responsible for spreading it into flocks through breakdowns in biosecurity.

“Infection can occur by the movement of contaminated equipment, vehicles, service personnel, visitors and pests including rodents and insects,” Conger said. “Less common are domestic pigs and pet birds.

“Once the virus is in a facility, it can move very quickly on shared equipment and contaminated clothing,” he said. “This is how it exploded in Minnesota and Iowa in 2015.”

Personnel in commercial flocks who take steps to tighten up biosecurity are more likely to keep the virus out. During previous HPAI outbreaks, lateral spread of the disease did not occur in several states after an initial outbreak, Conger noted. The hope for poultry operations is that strong biosecurity programs can provide a barrier from this devastating disease.

Conger has been involved in HPAI outbreaks in the US since 1988 when 443 flocks with 17 million birds, primarily in Pennsylvania, were depopulated at a cost of $63 million. But this outbreak looks minor compared to the one that broke several years ago.

“The 2014-15 outbreak is the most notable because it is the most severe foreign animal disease incursion in the history of the US, including cattle, swine and poultry,” Conger said. “Nearly 50 million commercial poultry were depopulated, including 42 million laying hens. It cut deeply into the table-egg industry.”

The epidemic started with an outbreak of the H5N2 strain in late 2014 in the Pacific Flyway. By the first week of March 2015, H5N2 showed up in the Central Flyway in a Minnesota commercial turkey flock. The HPAI strain then spread rapidly with 110 outbreaks in Minnesota and 77 outbreaks in Iowa. Neighboring states also experienced outbreaks but in much smaller numbers.

The last outbreak of the H5N2 strain occurred in mid-June after infecting a total of 211 commercial and 21 backyard flocks in 21 states in the US.

“One billion dollars was spent by USDA APHIS and the US Congress in that response,” Conger said. “It was a devastating infection, and we do not want to revisit that scenario again. That’s why biosecurity is so important in protecting your individual flocks.”