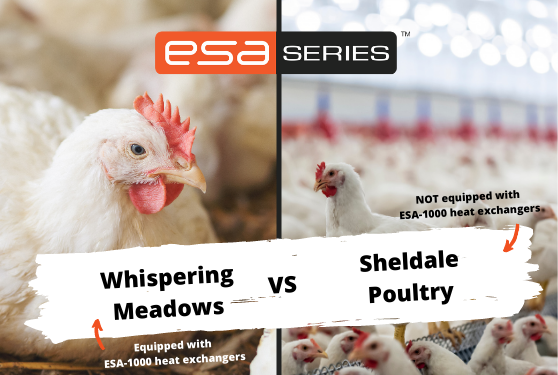 The brothers Randy and Sheldon Martin are both organic broilers producers in Ontario. Their respective farms Whispering Meadows (owned by Randy) and Sheldale Poultry (owned by Sheldon) barns are pretty much identical. The main difference? The first one is equipped with six ESA-1000 heat exchangers while the other one does not have any… for now. For over a year, the brothers have been comparing their respective productions. And the results leave no room for doubt.

Soon after building his barns in 2014, Sheldon Martin decided to install a furnace heating system in his building. He wanted to lower the humidity and dry out the litter in his poultry barn. Instead, he ended up with a new problem on his hands.

“It was not optimized for an agricultural environment. Dust accumulated in the system and a fire broke out. It was the last straw,” Sheldon recalls.

His brother Randy drew on his experience to avoid repeating the same mistakes. “At that time, I was looking for an efficient way to ventilate my poultry barn that would keep cold drafts as low as possible. I read about the heat recovery technology, used in the ESA-1000s, and I found that really interesting,” he says.

Satisfied with his meeting with the ESA team and won over by the technology, he decided in 2019 to install six ESA-1000 units in his barn. As they run on electricity and not gas, he wasn’t scared a fire would break out in his barn.

Data that speaks for itself

Almost a year and a half after starting collecting production data on both farms, the results are unequivocal. At the end of a flock, the litter at the Whispering Meadows is not only drier than at Sheldale Poultry, but it is also more uniform.

The grower’s observations also suggest that Randy’s birds are off to a better start than Sheldon’s. In the first ten days of their life, the mortality rate is lower at Whispering Meadows Farm than at the Sheldale Poultry Farm.

“My bird mortality rate has dropped by at least 3% since installing the ESA-1000s,” says Randy.

He estimates his condemned meat rate at 0.5%, against 1% for Sheldon, the results being strongly linked to the quality of the litter. “We get the same price per gram for our birds, but since Randy’s are generally bigger, he gets more profit from them,” says the owner of Sheldale Poultry.

Sheldon does not have enough data yet to draw a representative picture of his propane consumption, but according to Randy, he’s heating costs have dropped significantly.

Sheldon Martin says that the ESA-1000 heat exchangers pay for themselves in two years just with the lower mortality and feed savings. “I’m looking forward to install my ESA-1000 units” he adds.