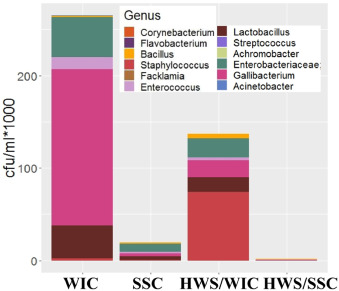 Reduction of Salmonella on poultry carcasses is one way to prevent salmonellosis. The purpose of this research was to evaluate the effects of subzero saline chilling (SSC) with/without hot water spray (HWS) on broiler carcasses prior to chilling for bacterial reduction. Eviscerated broiler carcasses were subjected to water immersion chilling (WIC, 0% NaCl/0.5 °C) or SSC (4% NaCl/-2.41 °C) with/without prior HWS at 71 °C for 1 min. Broiler carcasses in SSC were chilled faster than those in WIC, regardless of HWS. The combination of HWS and SSC resulted in the best reduction of mesophilic aerobic bacteria, Escherichia coli, and total coliforms on the carcasses over the WIC, SSC, and HWS/WIC. No Salmonella was detected on the carcasses in SSC and HWS/SSC while Salmonella positive was observed on the carcasses chilled in WIC and HWS/WIC. A trace of Gram-negative genus was detected on carcasses in HWS/SSC while many other microbiomes were observed on those in WIC, SSC, and HWS/WIC when quantitative microbiota profiles of 16S rRNA gene sequences were evaluated. Based on these results, chilling of broiler carcasses in 4% NaCl/-2.41 °C after HWS at 71 °C for 1 min significantly reduced carcass chilling time and bacterial contamination over the control chilling.

Poultry became the world’s most consumed meat in 2019 after overtaking the consumption of pork but has received negative publicity due to the high incidences of foodborne illnesses, particularly for salmonellosis and campylobacteriosis (CDC, 2018; Chaine et al., 2013). In poultry processing, birds are chilled in cold water (water immersion chilling, WIC) in the United States (US) or cold air (air chilling, AC) in the European community (Kang and Kim, 2017). In WIC, broiler and turkey carcasses are usually immersed in a water tank for 1 – 2 h and 4 – 5 h, respectively. However, the tank may provide an environment for bacterial cross-contamination and subsequent growth if the chilling is conducted poorly or in warm conditions (Singh et al., 2016; Bilgili et al., 2002; Blank and Powell, 1995).

The primary purpose of carcass chilling is to reduce carcass temperature and bacterial growth to the levels that will maximize food safety and shelf-life for consumers safety (Sams, 2001). Poor chilling will negatively influence product flavor, appearance, and processing efficiency. When carcasses are contaminated during processing, bacteria initially attach to the liquid film on the skin and then become tighter attached to the skin. Upon attaching to surfaces, bacteria showed a high resistance (up to 150 times) to disinfectants over the free cells and further resistance (up to 3,000 times) upon formation of a biofilm (LeChevalier et al., 1988).

Hot water treatment is one of promising intervention strategies that inactivate bacterial pathogens and improves product safety (Tompkins et al., 2008). Hot water exposure, which is approved for carcass decontamination in the US (USDA-FSIS, 1996) can be used to decrease the population of spoilage and pathogenic bacteria by 1-3 logs (Sofos and Smith, 1998). However, carcass exposure to 71 °C water for 1 min led to a partially cooked appearance (Zhang et al., 2011; Cox et al., 1974), whereas no detrimental effect on skin color was found at 70 °C for 40 s. James et al. (2007) reported that a single water treatment at 80 °C for 20 s decreased Campylobacter jejuni populations by 2.0 log CFU/cm without extensive degradation of the carcass appearance.

Combination of hot water spray (HWS) and SSC is expected to further reduce bacterial populations over a single application potentially due to the synergistic effects on broiler carcasses for heat-sensitive (hot water), cold-sensitive (cold water), and salt-sensitive (salt-water) bacteria. The purpose of this research was to evaluate the combined effects of HWS and SSC on broiler carcasses for chilling efficiency and bacterial reduction.

A total of 16 commercial broilers in 6 weeks old and live weights between 2.3 and 3.3 kg were obtained locally. These birds were electrically stunned for 3 s (40 mA, 60 Hz, 110V), bled for 120 s, scalded for 120 s at 56.7 °C, and defeathered in a rotary drum picker for 120 s in the Meat Processing Center at California Polytechnic State University. After manual evisceration and washing, carcasses (4 replications, n = 4) were randomly assigned to one of four chilling treatments as explained below.

Prior to poultry processing, sub-zero saline solution (189 liters) was prepared by dissolving 4% salt (w/w) in tap water using a 389-liter container. The solution was then placed in freezing room overnight at -12 °C, and a target temperature (-2.41 °C) of the saline solution was achieved while agitating continuously using a submersible pump (4E-34N, SupplyHouse.com). A control solution (0.5 °C) was prepared with ice, and the target temperature was maintained in a refrigerated room while agitating continuously as explained above.

Immediately after evisceration and washing, one carcass/treatment in medium size (∼ 2.8 kg) was selected, and a digital thermometer/logger (THS 292-501, ThermoWorks, American Fork) was inserted to the center of carcass breast. Carcasses were randomly assigned to one of the four chilling solutions with or without HWS at 71 °C for 1 min using a nozzle type of spray system as follow: 1) WIC in 0% NaCl/0.5°C solution; 2) SSC in 4% NaCl/-2.4°C solution; 3) HWS/WIC – HWS followed by WIC; 4) HWS/SSC – HWS followed by SSC (Figure 1).

After chilling, 25 g of skin was aseptically taken from the breast and neck areas to place in sterile WhirlPak bag (Nasco, Modesto, CA). Each sample bag received 225 ml of sterile phosphate buffer saline (PBS) and was stomached for 1 min (Stomacher 400 Circulator, Seward, Worthing, UK) to assess bacteria populations of the skin.

Salmonella: The presence of Salmonella was assessed by adding 30 ml of the stomached sample to 30 ml of buffered peptone water followed by 20 h of incubation at 37 °C. The amount (30 ml) of the pre-enrichment solution was then transferred to 30 ml of 2 x Rappaport-Vassiliadis broth and incubated at 42 °C for 20 h. A 120 µl aliquot of this enrichment was used to examine for Salmonella using RevealTM Salmonella test kits (Neogen Corp, Lansing, MI, US). All positive samples were streaked onto brilliant green sulfur and xylose lysine Tergitol 4 agar, incubated at 37 °C for 24 h, and inspected for typical Salmonella colonies to confirm the RevealTM Salmonella results.

To investigate any changes in bacterial populations on chicken carcasses after chilling in different solutions, the 16S rRNA gene microbiota profiling was performed using bacterial colonies formed on Petrifilm TM APC films. Briefly, all colonies on each Petrifilm were collected using sterile razor blades and combined. Genomic DNA was extracted from the pooled bacterial colonies, and the V4 region of the 16S rRNA gene from the genomic DNA was amplified for preparation the 16S rRNA gene sequencing library according to the protocol of the Earth Microbiome Project (http://www.earthmicrobiome.org). The amplicons from each sample were pooled together, gel-purified, and sequenced with the Illumina MiSeq platform with paired-end 250 cycle options. The raw sequence reads were processed using QIIME 2 version 2018.8 (Bolyen et al., 2018) with Deblur plugin (Amir et al., 2017). The taxonomic assignment was performed using a Naive Bayes classifier pre-trained with Greengenes (Version 13.8) at a 99% cutoff level for OTUs (DeSantis et al., 2006). To have a more accurate view of the changes in the populations, the relative abundance information for each genus was calibrated using the CFU/ml data to generate quantitative microbita profiles.

After chilling, the populations of mesophilic aerobic bacteria (MAB) on broiler carcasses were more reduced in combined treatments (HWS/WIC and HWS/SSC) than any single treatment (WIC and SSC). Out of the four treatments, HWS/SSC resulted in the best bacterial reduction followed by HWS/WIC, SSC, and WIC, with no difference observed between WIC and SSC (Table 1). The best decontamination of bacteria was expected due to the combined effect on broiler skin for the reduction of heat-sensitive bacteria by hot-water, cold-sensitive or Gram-negative bacteria by cold-water, and salt-sensitive bacteria by saline solution. The result of significant difference between WIC and SSC was in accordance with the previous report (P > 0.05%) (Lee et al., 2020). Microorganisms are inherently adapted to optimum function in their normal physiological environments, and any radical changes in environmental conditions inflict a stress on the organism (Bower and Daeschel, 1999). The environmental factors in a single treatment may not be as fatal to the cells as the combined factors of HWS and SSC. Many microorganisms can tolerate and adapt themselves to a certain environmental change over the time. The bacteria of psychrophiles, thermophiles, halophiles, acidophiles are known to have a better ability to survive than other bacteria in unfavorable conditions such as low/high temperature, high salt, and low pH, respectively (Beales, 2004; Hill et al., 1995; Prescott et al., 1993).

Means (n=4) within a row within common letters within

Four out of four samples were positive for Salmonella each column are significantly differet (P < 0.05).

In case of E. coli and total coliforms, the best decontamination was observed in HWS/SSC among the four treatments. It has been known that Gram-negative bacteria are less tolerant to freezing, salting, and heating conditions than Gram-positive bacteria (Mai-Prochnow et al., 2016; Dimitraki and Velonakis, 2007; Jay, 1992; Straka and Stokes, 1959). When the outer membrane of Gram-negative cells (thinner than Gram-positive cells) is damaged, the cells lose essential metabolic processes such as sensitization of cells to bile salts, lysozyme, or hydrophobic antibiotics (Mackey, 2000; Tsuchido et al., 1995). It is presumed that Gram-negative cells receive more heat-damage than Gram-positive ones during the hot water exposure. As a result, the physically damaged bacteria become more susceptible to the temperature and saline changes during chilling using the sub-zero saline solution.

Salmonella is one of most common bacteria that cause diarrhea and foodborne-related deaths (Eat right, 2019). No Salmonella positive was observed on the broiler carcasses after SSC chilling, regardless of HWS, whereas Salmonella positive was seen on the carcasses after control chilling, regardless of HWS (Table 1). These results support the previous results of E. coli in HWS/SSC and SSC chilling (Table 1) (Lee et al., 2020).

To investigate the changes in bacterial population on chicken carcasses after the four treatments, we performed 16S rRNA gene profiling analysis using the pool of bacterial colonies recovered on PetrifilmTM APC films. In alliance with the results of bacterial enumeration (Table 1), the combination of HWS and SSC eliminated most genus, with no detection of Gram-negative bacteria, whereas more bacterial genera were detected in SSC, followed by WSH/WIC and WIC (Figure 2). The sensitivity of bacteria to cold stress is dependent on several factors including the rate of cooling and freezing (Berry and Foegeding, 1997; Gounot, 1991). The rapid change of temperature from 71 °C to -4.1 °C in this study might induce a synergistic effect on the bacteria on broiler carcasses, especially Gram-negative cells.

In poultry processing, carcass chilling is one of major steps to prevent bacterial contamination and growth by reducing carcass temperatures, whereas the same processing can provide the potential for cross-contamination and tight attachment if the chilling is not conducted rapidly or performed in warmed water. Addition of food preservatives, reduction of environmental temperatures, and lowering of water activity are popular methods to inhibit bacterial growth. The combination of hot water spray and sub-zero saline chilling may induce unfavorable conditions to the bacteria on carcasses with no addition of chlorine and/or peracetic acids. No use of chlorine in poultry chilling can bring positive results including employee safety, consumer health, and penetration of European markets. However, additional research is required to evaluate bacterial populations on poultry carcasses after subzero saline chilling in different conditions, salt pick-up by carcasses, visual discoloration (or partial cooked appearance) after HWS, recycling of the red water after saline chilling, salt issue in the wastewater treatment etc.

The authors thank the USDA-NIFA (2020-67017-31272) and the Agricultural Research Institutes (ARI) of the California State University system for funding this research. The data that support the findings of this study are available from the corresponding author upon reasonable request.

Global Warming: How Does It Relate to Poultry?

How to create the ideal bird environment