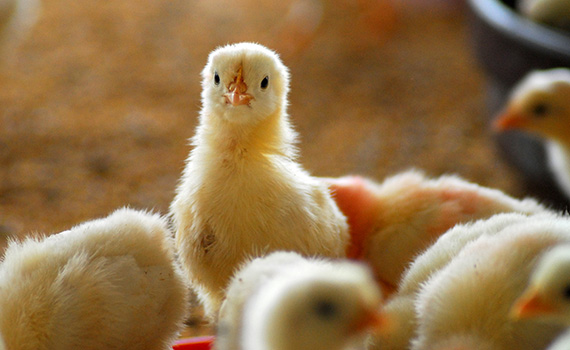 The evolution of Marek’s disease virus (MDV) has increased the pathogen’s virulence. Besides the tumors MDV is known for producing, the virus can lead to a multitude of other problems including neuritis, atherosclerosis, panophthalmitis and immunosuppression, she said.

MDV also appears to be widespread. In an unpublished study, Gimeno found that, in the US, 100% of broiler chickens were positive for oncogenic MDV at 7 days of age. In addition, the pathotypes of the disease can differ completely from farm to farm, Gimeno said at a forum sponsored by Zoetis.

Early immunosuppression causes massive destruction of cells by the virus and reduced response of lymphocytes, Gimeno explained. There are bursa and thymus atrophy and clear necrosis, along with cellular and humoral immunosuppression.

MDV reactivation is a more complicated situation that only occurs when birds are infected with vv+MDV. It is not related to lymphoid organ atrophy or tumors (there are no techniques for detecting it). It affects humoral and cellular immunity, and none of the current commercial vaccines protect against it. However, according to Gimeno, there is an experimental vaccine that may protect against it, based on a vvMDV strain that lacks the oncogene Meq.

“This is the most critical part of Marek’s disease because we don’t know how to diagnose it, and we don’t have methods of control,” Gimeno said.

Other non-neoplastic as well as neoplastic diseases need to be included in the differential diagnosis for MDV.

Sometimes clinical signs are inconclusive, because they may be identical to those caused by other diseases, she added.

Producers should start with the epidemiological and clinical data they have, and they should look for macroscopic lesions. Histopathology is also important, along with other laboratory techniques like immunohistochemistry and real-time polymerase chain reaction (PCR) tests. Real-time PCR is the technique most used for early diagnosis (as early as 3 weeks), to confirm diagnostics and to differentiate between infection and disease, Gimeno said.

“Whenever there is a problem with MDV, the first thing we’re going to do is audit the hatchery,” Gimeno said. The audit should include:

“Cell suspensions in MD vaccines are unstable,” Gimeno said. “They tend to attach to each other, so that’s why proper mixing is important along with dose uniformity and timeliness of vaccine administration.”

If the hatchery audit is satisfactory, the next thing to do is a vaccine replication in the chickens with real-time PCR (feather pulp at 7 to 10 days), Gimeno said.

“We normally collect samples in the wing [feather tips with pulp], and they can be collected at the farm. They should be kept separate, with each kept in a small plastic bag or in aluminum foil,” she said. Zoetis recommends plucking at least 10 feathers per bird from the axillary feather tract. Feathers should be short, newly growing feathers with plenty of pulp.

If replication is good but the farm is still having problems with MDV, it could be due to an early infection, a more virulent strain or a co-infection with other immunosuppressive diseases (like infectious anemia), she noted.

“Remember, to have protection against Marek’s disease you need to have a very good cellular immune response, and chicken infectious anemia would depress the immune response. Of course, mycotoxins could be another factor, but if chicken infectious anemia is not under control, you’re not going to have Marek’s disease under control either,” she pointed out.

Various strategies can be used to enhance protection such as revaccination, in ovo vaccination, and protective synergism, which combines different types of vaccines. Research on the use of adjuvants (including TLR-3 agonists) is ongoing.

New recombinant herpesvirus of turkey (rHVT) vaccines have the advantage of providing protection against two or three diseases, according to Gimeno. They have little or no interaction with maternal antibodies, and in ovo administration is safe. They are used worldwide, have little or no horizontal transmission, and they provide long-lasting immunity, she said. Replication of rHVT vaccines, however, is affected by dose, the route of vaccination and by combination with other MD vaccines. These things need to be kept in mind when using rHVT vaccines, she said.

With revaccination, the second rHVT vaccine should be different and of higher efficacy than the first vaccine, and both vaccines need to be administered before birds are challenged with the virus. Gimeno said the best protocol is in ovo first, followed by subcutaneous vaccination.

“In ovo administration of HVT will hasten maturation of the chicken-embryo immune system,” she said. “There’s no human error with in ovo, and it’s administered 2 to 3 days before the chicks hatch. You’re going to have better protection against early challenge.”