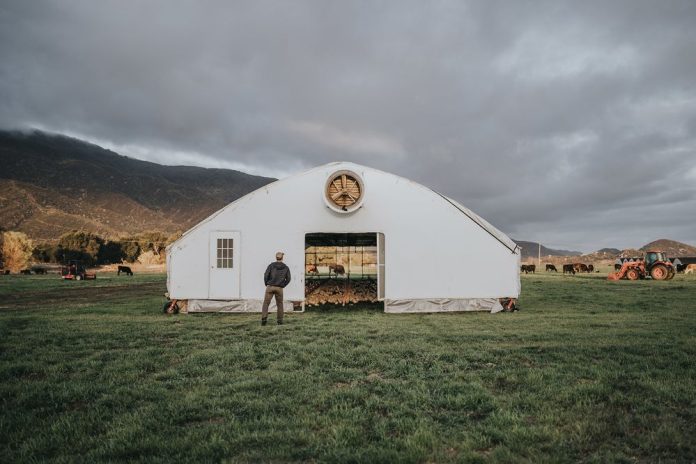 Perdue Farms is testing technology that may help with a labor crunch in the meat industry as it pertains to raising chickens outdoors: rolling, solar-powered houses that bring birds to fresh pastures every day.

The mobile coops are being used on farms in California and Georgia and allow Perdue, the fourth-biggest U.S. chicken producer, to guarantee that the birds spend the majority of their time on pasturelands. Each coop, measuring 150 feet by 50 feet, can hold up to 6,000 chickens.

So-called pastured chickens are supposed to go outside each day and are, some say, better-tasting than industrially raised animals. Normally, workers would have to manually move chicken houses to a new field. Sometimes, premium chickens including ones labeled free-range only have access to the outdoors, when in reality, they rarely see much light of day due to space and housing constraints.

“The way the system is designed is meant to mimic animals in nature,” said Ryan Perdue, a vice president and the general manager of the pasture poultry and pet business, as well as a member of the family that founded the company. “They eat, poop and move on.”

The effort comes as global chicken producers try to meet growing demand for meat raised with sustainability and animal welfare claims. Consumers have shown a willingness to pay premiums for such meat. The solar-powered houses could potentially help expand outdoor bird production.

At the same time, a lack of labor and surging prices for feed are prompting meat companies to look for alternative methods to conventional production, in which birds are concentrated tightly largely indoors.

Chicken’s popularity is soaring. Prices for some cuts such as wings and tenders have risen to the highest levels ever this year amid production issues and strong demand.

Moving the coop allows grass to recover after grazing while the chicken manure also helps to boost plant growth. Meanwhile, birds moving around actively result in a meat that has less saturated fat, Perdue said in an phone interview.

The company is in the process of scaling up the mobile-coop system to more farms and is in conversations with customers on how much of a premium consumers would be willing to pay for pasture-raised poultry. They declined to disclose production costs of the method, but said it wasn’t cheap.

The chicken will probably be priced “closer to the upper tier” near organic and free-range poultry products, Perdue said. “It costs more to raise an animal this way, even with an automated system.”