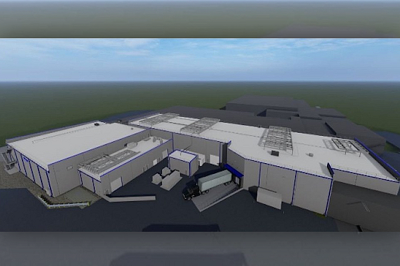 The project will add 65,000 square feet to the existing plant and create 100 jobs, a news release said Thursday. Some of the jobs include skill positions that support robotics and automation processes. Work is expected to begin later this month.

“We’re excited to build on our success in the region,” Joel Sappenfield, president of Simmons Prepared Foods, said in a written statement.

The Siloam Springs-based poultry and pet food company has three production factories in the River Valley as well as a hiring center and care clinic for workers and their families.

There are 600 people employed at the Van Buren location at 2101 Twin Circle Drive, where tons of chicken products undergo further processing.

The plan to add two automated production and packaging lines is expected to nearly double production capacity to 210 million pounds of chicken per year. Plans also include enhanced interior spaces for workers and improved traffic flow in and around the site.

In addition to the jobs created, Sappenfield said the expansion will support growth in the local economy and assist in meeting market demand for cooked products.

Nabholz Construction is the general contractor for the expansion.

In recent years, meat and chicken producers have researched and experimented with automation and robotics technologies to improve worker safety and production. Many accelerated plans after the coronavirus spread and temporarily shut down operations.

Competitor Tyson Foods last month said it plans to invest $1.3 billion to increase automation in meat plants over the next three years.

The meat industry has struggled to find enough workers in the past two years because of a tight labor market and health concerns during the covid-19 pandemic.

The automation of certain jobs that are difficult to fill will help with this and pave a path for higher skill and pay opportunities for workers, Donnie King, Tyson’s president and chief executive, said in a recent investor day presentation.

Simmons Prepared Foods is one of the leading poultry producers in the U.S., and its affiliate Simmons Pet Food is the largest supplier of wet pet food in North America with products sold at Walmart and other retailers.