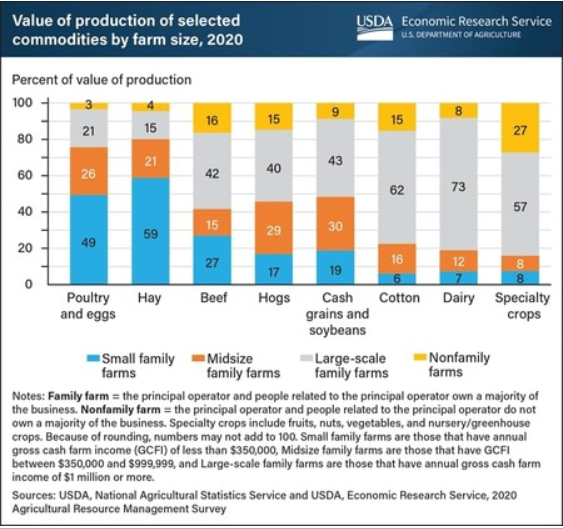 In 2020, most of the values of cotton (62 percent), dairy (73 percent), and specialty crops (57 percent) were produced on large-scale family farms. USDA defines a family farm as one in which the principal operator and related family own the majority of the assets used in the operation.

Large-scale family farms are those with an annual gross cash farm income of $1 million or more. However, small family farms produced the bulk of hay production (59 percent) and poultry and egg output (49 percent) in 2020.

Poultry operations are often classified as “small” because most output is under a production contract arrangement, with a contractor paying a fee to a farmer who raises poultry to maturity. Additionally, more than one-quarter of beef production occurred on small family farms that generally have cow/calf operations.

Another 42 percent of beef production occurred on large-scale family farms, which are more likely to operate feedlots.

Midsize family farms production ranges from 8 to almost 30 percent of value of production.