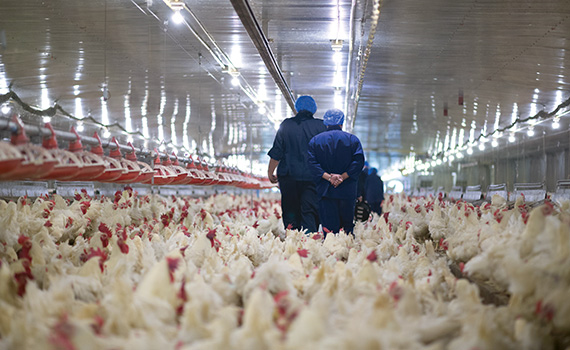 Each day, Tyson Loewen rises at 5 am and heads to the four chicken houses on his Guntersville, Alabama, farm. For the next 5 hours he studies his flock of 180,000 birds. He looks for disease symptoms, assesses air quality and litter, checks the water supply and picks up dead birds.

His day typically ends around 9 pm — some 16 hours after his alarm sounds — when he does his final check on the chicken houses. He works this way for 45 days and then gets 20 days off to prepare the houses for the arrival of the next flock. He gets six flocks each year.

Loewen, a contract grower for a major poultry company, has been in business for nearly two years. So far, he says, being a contract grower is working for him. His mortality rate hovers at about 6%, and he’s striving to bring it down to 4%. Each of his flocks yields about 1 million pounds of meat.

To hear several poultry veterinarians and consultants tell it, Loewen’s approach to raising chickens has the hallmarks of what it takes to be a successful contract poultry producer.

Being a contract poultry producer is tough, hands-on, 7-days-a-week work that requires a significant financial investment from the farmer (in many cases more than $1 million in loans).  When done well, contract poultry farming can be personally, professionally and financially rewarding.

“The ones on the top of the list realize that it is a 24/7 job and that you have to be able to commit to that to be successful,” says Tom Tabler, PhD, a poultry professor at Mississippi State University Extension.

“I was a service tech and I grew chickens. I was in the chicken house at 5 in the morning and at 10:30 at night. If you check your chickens at 5 in the evening and don’t come back until 8 or 9 the next morning, you’re not going to be very successful. That’s what people that are successful understand. The chickens don’t care if it’s Christmas, Thanksgiving, your anniversary or the weekend. They have to be taken care of every day and you have to commit to that. Some folks aren’t cut out for that type of lifestyle.  Therefore, contract poultry farming is not for everyone.”

Among other things, successful contract poultry farmers are hard workers, detail oriented and must literally serve as the gatekeepers of biosecurity, several experts and industry insiders say.

Here are the main things they look at when evaluating contract growers:

Growers watch for signs that all may not be well, he says.  In addition, they spend a considerable amount of time in the chicken houses striving to understand the birds, including their moods, their health and factors that may stress them out and have an impact on their health.

“A 5-gallon bucket is the best friend you have,” Tabler says. “You need to take that bucket and sit there and learn how chickens act at different periods. How do birds respond if they are too hot, too cold, feel a draft they don’t like, or are out of feed and/or water? How do they behave when things are just right? If you watch them long enough, you will learn if they are happy or not happy. The birds will tell you if something is wrong. You just have to know how to speak chicken.”

Successful growers are voracious learners. They read and study extensively and attend seminars, French says. He says Sanderson Farms usually has a grower meeting once a year, where the company brings them up to date on new trends and dispenses information about the biggest threats to their income and success.

“When I see growers (at these meetings), it tells me they are committed and want to do better,” he says.

“The best growers stay abreast of new technology, read the educational materials from their company, the Extension service and in industry publications,” and keep up with the latest technology, adds John Smith, DVM, Alectryon LLC, a poultry consultant based in Baldwin, Georgia, and retired veterinarian with Fieldale Farms in Georgia.

As every grower ought to know, just one breach in biosecurity could make the difference between a healthy flock and a disastrous one — which is why successful growers rigorously enforce their biosecurity protocols, including carefully monitoring who comes on their farms and who goes near or into their chicken houses.

“A really good grower knows who’s coming to their farms all the time,” says Suzanne Dougherty, DVM, an independent poultry consultant in Athens, Alabama, and also executive vice president of the American Association of Avian Pathologists.  “I like it when I pull up to a farm and the farmer is right behind me.”

Without these protocols in place, transmitting diseases like avian influenza can be remarkably easy, she says.

Smith adds: “It only takes one mistake to track something in.”

“With the high humidity we have here in the South, we require them to change the foot baths at least once a month,” he says. “A good grower will change them at least twice a month.”

Access to clean water is a critically important source of the birds’ health. Birds drink twice as much as they eat, says Don Ritter, DVM, a veterinarian with Mountaire Farms in Salisbury, Maryland.

Just as important is what’s in the water. The water should be monitored regularly for minerals and pH, Dougherty says, adding that the level of pH in the water can have an impact on the birds’ gut health.

One night of ammonia or really bad air can open that chick up to whatever disease comes by, Smith says.

Tabler says veteran growers often become desensitized to the smell of ammonia in the house and often have higher levels than they realize. There are hand-held ammonia sensors available, which cost between $400 and $500 each, that may be beneficial for some growers, he says.

Reducing ammonia and humidity levels goes a long way. Loewen says he has found that the best supplement he can give the birds is more air.

In addition, successful growers are adept at managing litter and reducing humidity and moist conditions in the house. Wet litter is bad for the chickens and generates more ammonia, Tabler says.

“Microbes of all kinds love moisture,” Ritter adds. “The more humidity and wetness in the house, the more disease organisms.”

A hundred years ago, the mother hen’s job included keeping the chicks warm and showing them where the food was. In today’s commercial poultry business, the grower has taken on the role of that mother hen, Smith says.

How well the grower meets all the birds’ needs and makes them comfortable will have a significant impact on their stress levels and, ultimately, on their ability to resist disease, he adds.

8. Ability to raise ‘no antibiotics ever’ birds

In the past, the use of antibiotics helped make up for mistakes on the part of growers.  With retailers putting more pressure on poultry producers to reduce or eliminate certain antibiotics, and with FDA clamping down on those deemed medically important to humans, the potential for glaring errors has gone up significantly, Tabler says.

“By taking antibiotics out of the feed and out of the hatchery, a lot of chicken growers (and chicken companies) are going to have to learn to grow chickens all over again,” he says. “They have to ratchet up their management level without antibiotics. Everything is going to have to be done a little better at a higher degree of performance.”

Having strong mechanical skills is not a requirement for being a contract grower, but knowing how to tweak or fix your lighting, water lines or ventilation without hiring outside help can go a long way.

“Integrated poultry production has allowed many small farmers to remain on the land and feed their families, particularly in areas with less than ideal soil for crop farming,” Stayer says.

“Almost all broilers produced in the US are raised on family farms with contracts to large integrators. This model has helped keep chickens hatched and raised in the US among the healthiest and lowest cost of production in comparison to the rest of the world.”