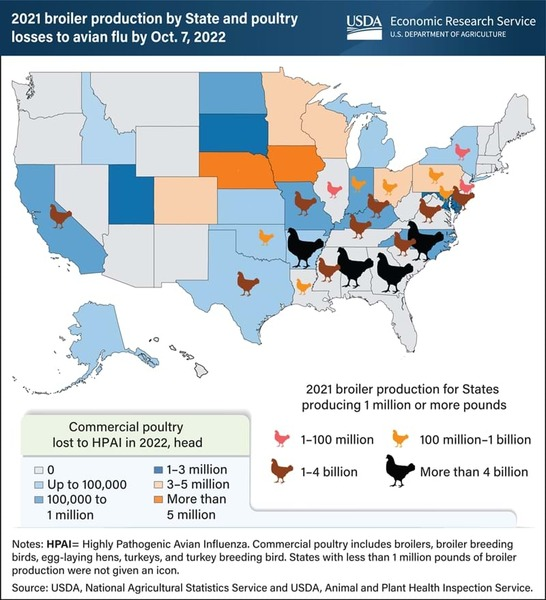 The 2022 highly pathogenic avian influenza (HPAI) outbreak has had relatively little impact on the broiler industry based on the volume of broiler meat produced in the United States.

HPAI was detected in Indiana in February 2022 for the first time nationally since 2015 and was soon confirmed at multiple commercial poultry operations. Flocks at operations with detected infections were depopulated to prevent further spread of HPAI. Because of the limited overlap of the 2022 HPAI outbreak with broiler-producing regions, commercial flocks in the top four broiler-producing States (North Carolina, Georgia, Arkansas, and Alabama) have largely avoided HPAI.

Of the 43.8 million commercial birds depopulated as of October 7, 2022, 2.3 million were meat-producing broilers. This represents less than a tenth of 1 percent of typical annual broiler slaughter. The effect on broiler production during the 2015 outbreak was also relatively small.

Production reached a then-record volume, increasing nearly 4 percent from 2014. Broiler production has increased every year since and is forecast to total more than 45 billion pounds in 2022.